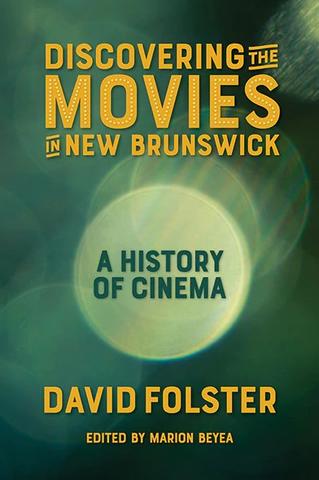 David Folster’s posthumously published Discovering the Movies in New Brunswick offers a journalistic and intentionally wandering study of its title province’s cinematic history. Spanning the late nineteenth to early twenty-first centuries, the book comprises a dense collection of esoterica, six-degrees-of-separation links, margin notes, and coincidences, all centered in a locale not customarily associated with film history (the province of New Brunswick). Folster writes in a conversational voice, relaying historical events and industry information in an often quietly wry tone. The stories included in this book are not generally punctuated by seismic events (though there are some moments of intense historical drama) but are instead focused for the most part on curiously contingent connections. The hyper-specific nature of the episodes in Discovering the Movies align with the author’s self-identification as a steadfast journalist fuelled by “the notion that, if you dig deep enough, you can usually find a good story, sometimes even a meaningful one.” Certainly, the book is episodic by intentional design, given that New Brunswick’s cinematic history lacks the kind of clear, propulsive narrative throughline that characterizes, say, the emergence of the Hollywood studio system. Still, Folster organizes the events into a chronology that resembles something like a reel of the most interesting “deleted scenes” of early cinema history. Given its rigorously researched and detailed content, this text should prove both a particularly useful resource for scholars exploring Canada’s film industry, and an entertaining read for casual readers curious about New Brunswick history.

The first chapter, “At the Doorstep of the Movies,” begins with the tragic death of popular society photographer, William Herman Rulofson. Originally from New Brunswick, Rulofson falls from the roof of his San Francisco studio in what is ultimately unresolved as either a suicide or an accident. Rulofson fits into Discovering the Movies’ narrative by virtue of his friendship with Eadweard Muybridge, who Folster aptly describes as the “father of motion pictures”: Muybridge’s sequential pictures of galloping racehorses (most famously, Sallie Gardner at a Gallop [1878]) announce the origins of what eventually came to be cinema. Despite the scarcity of existing biographical information on Rulofson and Muybridge’s formative years, the text details some of the shocking events of their later years. For example, Muybridge eventually murders drama critic Harry Larkyns for having a romantic affair with his wife, Flora, and Rulofson serves as a court witness in the ensuing trial. The second chapter, “First Flickers” expands on the advent of late nineteenth-century cinema in New Brunswick, highlighting the province’s 1896 acquisition of the first Cinographoscope (a technological descendant of Muybridge’s “magic lantern zoetrope,” a cylindrical device used for moving picture projection). This chapter also traces the birth and early life of Hollywood star Walter Pidgeon (How Green Was My Valley [1941], Mrs. Miniver [1942]), who is born in Saint John, New Brunswick in 1897 and later attends the University of New Brunswick as a young adult. Again, these anecdotes align with Folster’s book-length demonstration of episodic style. Pidgeon, like many other people in the text, plays a sort of memorable cameo role.

Chapter three, “Movie-making in the Land of Canaan,” then moves into the twentieth century by introducing another star character in the broader narrative of burgeoning cinema, pioneering documentarian Billy Bitzer, who comes to the province in 1905 to shoot pictures about moose-hunting and salmon-fishing. This development is important in that it sees the evolution of cinematic language within a Canadian context, moving from “single-shot glimpses of daily life” to the advancement of “complete stories.” Bitzer collaborates with Frank Marion, his boss at the Biograph company, to comprehensively capture every stage of the moose-hunting and salmon-fishing processes (the book reveals that some staged moments make their way into the documentary footage). The resulting films, A Moose Hunt in New Brunswick and Salmon Fishing—Nepisiguit River, are shot in 1905 and are the oldest surviving motion pictures in the province’s history. This chapter finds yet another surprising connection point to the larger storyline of cinema in that Bitzer later becomes one of director D. W. Griffith’s (The Birth of a Nation [1915], Intolerance: Love’s Struggle Through the Ages [1916]) closest collaborators, from 1908 until the 1920s.

Discovering the Movies in New Brunswick goes on to cover a substantial amount of thematic and historical territory. Spanning from further study of “backcountry” filmmaking in the tradition of Bitzer’s pictures, to the provincial origins of nickelodeons (early motion picture theatres), the text teems with obscure details and fascinating “subplots” tenuously connected to cinema’s master narrative. One of the book’s most memorable and noteworthy sequences revolves around prominent producer Louis B. Mayer (of Metro-Goldwyn-Mayer); the industry giant pays a nostalgic visit to Saint John, New Brunswick, the city where he was born, and is honored at a dinner attended by such noteworthy guests as the city mayor and the province’s chief justice.

It is worth noting that the book emphasizes the industrial machinations of cinema history more intently than it does the form’s artistic and formal developments. That is, Folster concerns himself primarily with the material complexities of production, funding, and distribution, offering usefully comprehensive information for scholars focused on these aspects of film studies. From the construction of filmmaking technology to the material process of shooting footage to the (sometimes disastrous) projection of finished films, Folster is scrupulously exhaustive in his research.

Before moving into its epilogue, the text includes an interesting “coda” comprised of Folster’s interviews about the province’s cinematic history with various New Brunswick residents (from writer David Adams Richards to filmmaker Giles Richards to two of Folster’s movie-loving friends, Barbara Birkland and Madeleine Gallimore). This is a fitting conclusion to an episodic book written in deliberately approachable, colloquial language.

Though the author sadly passed before he was able to complete Discovering the Movies in New Brunswick, the book reads very much like a complete project, offering a thoroughly comprehensive chronology of its subject matter.

David Folster was a journalist, social historian, and heritage and conservation activist from Fredericton, New Brunswick. He wrote for a wide assortment of magazines and newspapers including the Globe and Mail, Maclean's, Sports Illustrated, Canadian Geographic, and the Christian Science Monitor. He was a frequent contributor to CBC Radio and Television programs. He is also the author of The Great Trees of New Brunswick and The Chocolate Ganongs of St. Stephen, New Brunswick, a narrative history of the business that was shortlisted for the 1990 Canadian Business Book of the Year Award.