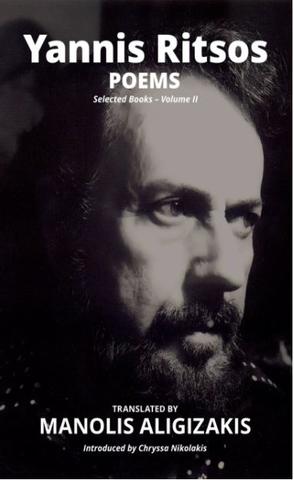 The review editor of The Fiddlehead has sent me volume II (450 pages of a projected three-volume set) of translations of the poems of Yannis Ritsos, a world class twentieth-century poet (think of as equivalents: Neruda, Celan, Rilke etc.). A dedicated Marxist, serving with the National LIberation Front against the Axis and the fascist Greek governments, and during the subsequent civil wars, Ritsos was much persecuted. He was twice imprisoned, banished, exiled — his books were banned, and editions of his hugely popular third book Epitaphios (on the death of a striking tobacco worker) were publicly burned. He was awarded the Lenin Peace Prize and twice nominated for the Nobel (which I think he should have won.) His work has been abundantly translated but I do not think there is yet a complete translation into English. I have no Greek so can’t judge the work as translation. And since I have only volume II, I am not able to generalize about the whole of Ritsos’s work — (and indeed, that would require long study). What sort of “review” of one third of a huge “complete” edition of poetry written in a language I can’t read from a country whose complex history I only slightly know, could I write for The Fiddlehead?

What I can say is that the poems Englished in Volume II, which includes poems from twelve of Ritsos’s collections, are among the very best poems in my heavily poem-booked house, and while this excellence is likely mostly due to the intelligence and sensitivity of Ritsos, it is also due to the skill of the translator, Manolis Aligizakis, a poet himself, as well as a widely experienced translator. (I had praised in The Fiddlehead his translation of Dimitris Liantinis’ Hours of the Stars a few years ago.) Aligizakis has a wonderful ear for the cadences of the English language and can produce for us emotional suggestiveness and musicality without the bows and ribbons of stress, syllable count, obtrusive rhyme, or artificial rearrangements of the speakable sentence. The voice Aligizakis provides for Ritsos is gentle, intimate, leisurely, the vocabulary plain, the imagery powerfully effective — but unornamented. For example, a poem from the collection Exercises:

Someone knocked at the door.
Come in.
No one.

The door entered the house.
It stood — it didn’t sit.
Good evening.

The whole night
remained open
behind the door.     “Expectation” (75)

Most of the poems in Volume II are much longer but tend to be similarly charged with implied emotions. They read like memories and explanations, but are rarely dramatized narrative, not even when, as in most of Ritsos’ poems a listener is implied, (and, occasionally, briefly characterized — even though the poetic speaker appears to be mainly addressing himself as much as the listener.) The prevailing note is one of great sympathy — for the suffering (even for the re-imagined Phaedra) and the classical palaces become, in Ritsos’s verse, similar to the small city-and village-scapes his speakers re-visit: domestic, war-bruised.

Apart from the three long “classical” poems, “Philoctetes,” “Ismene,” and “Phaedra,” Ritsos’s poems are set among the working class, and are spoken to an implied or described listener explaining and rediscovering the situations which centre the poem: issues of poverty, injustice, war, illness, deaths — and our human response. He does all this with extreme beauty — but also at a very slow, gentle pacing, so that it is impossible to find a short quotation from one of the magnificent long poems that will carry enough of the richness of suggestion, the complexity of reference, and the relation of the quotation to its context. The poems do not provide a summary, but rather an understanding or perception slowly revisited, more deeply perceived. I think of Ritsos’s method as like dog-nosing — the way a dog finding an interesting smell at the foot of a bush will investigate and re-investigate, “reading,” one supposes, with ever deepening insight. Each stanza might require pages of clumsy prose to “explicate.” Each stanza enlarges and builds upon the previous. I can not without pages of explanation quote from one of the long monologues. But the situation in “Shape of Absence,” a series of thirty-two poems on the subject of the death of a child needs no explanation, and demonstrates Ritsos’s heartfelt identification with the suffering he records:

A young girl, unsuspectedly, suddenly got caught out
in the sorrowful night. Then what was her life?
And her pain? And her cry? Are all these hers?
And they lay behind her laughter ready and
conniving? And these beloved persons
who stooped over her, already aloof? For this
she opened the door of a star quietly and entered carefully that we wouldn’t hear her,
carefully that we wouldn’t hear her,
though every night that door echoes from the wind
of her soft sob. And she couldn’t get up and
close it; nor did we (so far away it was).
“Shape of Absence,” XI (154)

This room has become a deep water well;
the lamp a star nailed in the water.
The bed of the child in its place and sometimes
the bed-sheets create reflections in semicircle shapes
because high up on the surface of the water
the hours fall softly and slowly like straw
printing vague circles in the water. No one talks
inside this room, and if one talked he wouldn’t be heard.
And if a glass
leaned over and fell, it would fall in the palm of silence
quietly;
it wouldn’t break. Only the ancient cry of separation,
dissolved in the water, makes the well deeper and darker.
“Shape of Absence,” XII (155)

There is no way one can excerpt so briefly from the great psychologically profound long poems such as “A Dog in the Night,” “Public Garden,” or “The Bridge.” They have too much to say — (although “The Bridge” might well furnish a statement for Kairos.)
The Collected Poetry of Yannis Ritsos Book II is a marvellous book.*

*The book however has one defect — it was not adequately proofed before it was sent to the printers. The problem is not so much the occasional typo (though there are too many for material of this stature) but rather that whoever typed up the manuscript that was sent to the printer has difficulties with the English language — especially, and alas, very conspicuously, with the two tricky verbs, the intransitive “to lie” and the transitive “to lay.” The typist does not only mix the colloquial misuse with the correct use (and there is no reason in the translation’s general style to suppose that Ritsos wrote colloquially ungrammatical Greek) — the typist also misuses the two verbs uncolloquially: “he lied down” for example. To find these errors in Ritsos’s beautiful poems is like finding grit in soup. Could Ekstasis Editions afford to bring out a corrected edition? These days? The economy of not checking the whole (huge) manuscript that one last time before printing was no economy. In difficult times we get careless. But it is a great pity.