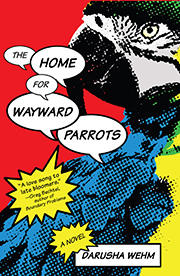 By Megan Kuklis
A Review of Darusha Wehm's The Home for Wayward Parrots (NeWest Press, 2018)

The Home for Wayward Parrots by Darusha Wehm is a charming novel that centres on the complicated lives of its many sweet characters. Exceptionally readable, the novel flows through the past and present of Brian “Gumbo” Guillemot’s life with such care that readers will not be able to put it down. This novel should be devoured in a single sitting.

Gumbo is a mid-career engineer who has been searching for his birth parents for over thirty years. He is passively happy in his life; he has a decent job, a quiet social life, and an occasional girlfriend, yet something has always felt missing. Brian believes that finding his birth mother will change his life for the better, and in many ways it does. What could have been a trite and bland novel expertly manages to avoid sentimentality with a combination of humour and hubris. I found myself rooting for Gumbo in his quest to find himself, hoping he gets the happy ending he is looking for.

The oversized parrot on the cover might suggest that the story is about pirates or illegal bird trafficking, but instead the novel is a utopic, coming-of-age story for millennials; a fantasy love story where nearly all of the characters are sexually fluid, hold university degrees and have successful careers in their fields of study. But at the heart of Wehm’s novel is the question of what constitutes family. Gumbo had a relatively normal life growing up in Victoria, BC, raised by a police officer (mom) and a nurse (dad). He still wondered, as many adopted children do, about his biological origins. His search for his birth family was supported (and even encouraged) by his adoptive parents; however, he chooses to keep his search a secret. When he reveals to his family that he has found and made contact with his biological mother and her children, his parents are both surprised and a little skeptical:

“Family isn’t about genetics, Brian,” Dad said. “I would have thought you’d know that by now. I’m sure they’re lovely people and I’m glad you’re learning about your roots, but don’t be fooled. They may be related to you by blood, but they don’t know you and you don’t know them….”

Wehm expertly captures Brian’s conflicted feelings, his need for acceptance, and his parents’ disappointment, dismay and their overall shock. The chapter ends with Brian musing, “I was thirty years old and it was the first time I’d ever been kicked out of my parents’ house.” His reaction is less about what his parents might be feeling, and more about how their reaction affects him: a perhaps stereotypical, millennial reaction to a heart-wrenching and emotional scene.

Brian’s often oblivious and entirely awkward point-of-view makes encounters with his friends, girlfriends and family entertaining reading. He narrates his life story through a series of flashbacks and foreshadowing, leaving narrative cliff-hangers that will keep readers engrossed. While navigating the politics of his new birth family he reminisces about old relationships and where they went wrong: “Obviously, it would have been easier for me if I’d been gay. So, after one particularly nasty breakup, I tried. Kind of.” It is the addition of the “kind of” that is typical of Brian. He sits down at a local gay bar and tries to become attracted to the men, but his attention keeps wandering back to the women. The entire scene is ridiculous and funny. Brian is saved by further embarrassing himself when he runs into an old friend and they are able to talk about his girlfriend issues. He eventually reconnects with his former punk-rocker university girlfriend, Celia-Dee “Seedy” Pavane, when they are both guests at his half-sister’s wedding. Part of the charm of this reconnection is Brian’s surprise that Seedy would be interested in seeing him again: “She always knew how to get me to do what she wanted. I like that about her.”

Once Brian bonds with his birth mother Kim, his life-long search for his family connection would appear to be over, except that his mission is incomplete. In the final section of the novel, Brian is consumed by wanting to know the answer to the question: “Who is his father?” Kim is reticent, refusing to acknowledge Brian’s biological paternity for most of the novel. Finally, after a difficult and roundabout conversation, Brian pleads with Kim to not stand in his way of discovering for himself who his father is. She responds after a moment of silence:

“You know, everyone thinks they’re anti-social or just plain bad. But they aren’t malicious — I’m confident that none of those birds want to hurt anyone. They’re just operating without some basic information.”

Kim’s collection of violent and prone-to-expletives parrots had recently escaped in the middle of her daughter’s wedding, shredding tents and spraying guano on the guests. Brian, like the parrots, was operating without basic information; the parrots behaved as if everyone around them was a threat, and Brian assumed that nothing good in his life ever lasted. Their assumptions about what was real held them back from being truly happy. Kim reluctantly provides Brian with clues to his father’s identity, but it was up to Brian to follow the path to the truth.

The Home for Wayward Parrots is a tidy story about family and belonging. By looking backwards at his own origin story, Brian finds connections from his past that have been missing in his present, learning that shared understanding takes honesty, patience and, maybe, a lot of bird food. An enchanting and unforgettable story about modern friendship, love and family, Darusha Wehm’s novel is a joy to read and will leave you smiling.

---
Megan Kuklis is a graduate student at the University of Northern British Columbia, in Prince George, BC. She is currently writing her creative thesis, a young-adult fantasy set in the Canadian prairies.