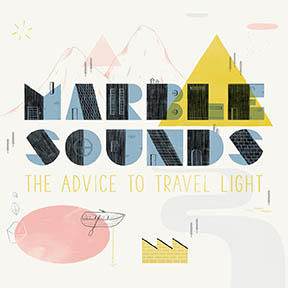 I can't have music playing when I write. Same goes for editing or even proofreading. It's a bit of a liability, unfortunately. At my day job, I work as a copyeditor in the newsroom of an international press agency and it would be incredible to be able to put on headphones and block out the sounds of televisions broadcasting the asinine comments of a particular world leader whose words have become fodder for the frenzied masses. But alas, I cannot. Listening to music while writing is not unlike rubbing my head while patting my tummy, and then switching.

That said, music is essential to writing, and is what I put on when story ideas are hatching and snippets of dialogue or description are floating around like lyrics, or when I’m in the middle of a draft and need a sort of musical interlude or intermission between scenes.

There are a few artists I'm listening to at the moment whose compositions really take me to where I need to go to churn out great material. Scottish band Frightened Rabbit is like a mosh pit for the soul, with the power to catapult me to the place where I can dig to the brooding deep and reckon with the demons. One song I listen to like an anthem is "I wish I was sober."

Danish songwriter Agnes Obel is like a portal into a mystic space in the mind and is great for dreaming up conspiracy theories, sci fi plots, or murder mysteries. The strings in her song "Familiar" really tug and the keys in "Dorian" are very pure. Cinematic Orchestra gets me going when I'm going for bombastic climaxes and Ludovico Einaudi's simple, looping melodies help with getting into a flow and staying there. I'm also a fan of Belgian artists, where I’ve lived for seven years as an ex-pat, because they help create an acoustic backdrop for the setting I write in, much as the Flemish painters do visually. Oscar and the Wolf is a nice groove to get into before writing, and his beats drive home the importance of sentence structure and punctuation. Stromae is a good reminder to not mince words. Marble Sounds' new album The Advice to Travel Light is well worth listening to for an inspiration-kick. It has a full sound that manages to lull like a post-modern lullaby. British indie rock band Alt-J knows how to be experimental without alienating, something that helps when I’m bending literary rules. The Netherlands’ Dotan has a really open sound that is typical of Canadian music, acting as a musical home away from home and keeping me rooted.