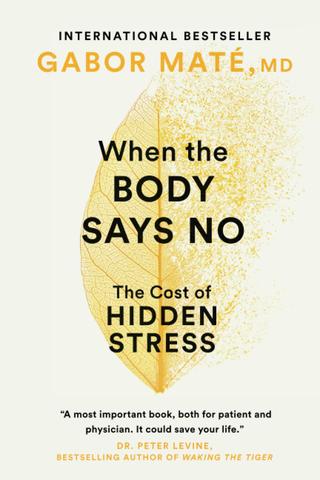 When the Body Says No: The Cost of Hidden Stress, by Gabor Maté, MD

In Dr. Gabor Maté’s When the Body Says No: The Cost of Hidden Stress, one story in particular gets to the heart of his message: that our so-called better instincts can be those that harm us most.

The story concerns a man, dying of cancer, who eats a daily helping of shark cartilage to save himself, a bizarre habit made slightly less so when you learn that it’s the man’s business to sell the stuff as a cancer cure. Still, the practice is disgusting, and not just morally. The cartilage, it stinks. For an already sick man to consume such a thing on a daily basis is, literally, nauseating. And what makes it even stranger is that he no longer even believes that it will help him. So why, then, does he persist? Apparently, according to Maté, to avoid disappointing his business partner. Only on the very brink of death does Maté convince the man to cease the practice—to think, for one time in his life, about himself.

Published in 2003, When the Body Says No reads today as less iconoclastic than it might have at the time. These days you can’t swing a self-help book without hitting a TED Talk or blog post about the many dangers of stress, about the link between chronic stress and myriad illnesses, from cancers to rheumatoid arthritis to heart disease. And all of those links Maté duly catalogues, combining the latest (at the time) medical research with anecdotes from his decades of experience as a family doctor and palliative care physician to make his case. But what lifts the book above so many others, besides the authoritative voice and literary talents of its author, is its extensive and mostly convincing examination of how for many of us our habits of mind, our lifelong patterns of self-denial, can themselves become sources of harmful stress.

In many ways, When the Body Says No acts as an antidote to the pernicious rationale underlying the still-popular Power of Positive Thinking mindset. In case study after case study Maté shows us the ways in which people dress the denial of their own needs in virtuous clothing—only to suffer illness as a result. They conceal childhood pain and abuse to protect the feelings of a parent. They receive terminal diagnoses and react only by thinking of how it might affect a needy spouse. They maintain a cheerful demeanour at the expense of acknowledging, much less expressing or even experiencing, their own needs. Such self-abnegation, by Maté’s telling, is no virtue, although modern society often praises it that way. In many cases, in fact, it appears to be deadly.

Like so many works that run counter to the prevailing orthodoxy (one example he emphasizes—that it is healthier to express anger to defend your physical and emotional space than it is to turn the proverbial cheek), Maté’s book carries a paradigm-shifting power at the personal level. You read the book and think: is he talking about me? To what extent are my interactions with others authentic, rather than elaborate attempts to smooth, through agreeableness, the experience of others? Might my habits of thought and behaviour, especially those that make me most acceptable to friends, family, neighbours, whoever, be secret sources of stress? And what subterranean layers of stress might exist in those around me, unknown even to themselves?

For many of us, this is rich material to mine, and doubly so for those of us who write fiction.  It adds another dimension to our understanding of a person’s character, fictional and otherwise, and raises the stakes of even the most banal of interactions. But that is really just an incidental side benefit of reading this book, and definitely doesn’t adequately express the impact it had on me. It’s a rare book, after all, that has the potential to change the way you live your life.

Will Richter's fiction has appeared or is forthcoming in The Threepenny Review, subTerrain, Arts & Letters, and Fiction International and was longlisted twice for the CBC Short Story Prize. His story "After the Crash" is featured in the new Spring issue of The Fiddlehead. He lives in Vancouver, BC.