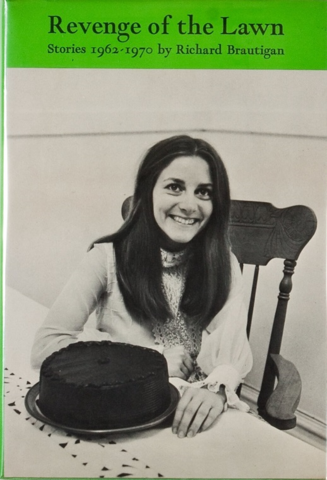 There have been three gut punches during my paltry career as a writer. The first was John Steinbeck's Grapes of Wrath, when I realized what was meant by literature as art. The second was Ham on Rye by Charles Bukowski, who showed me how to write about real life. Third was Revenge of the Lawn by Richard Brautigan. Of all the three, Revenge of the Lawn is the one I constantly return to. Brautigan was introduced to me around the time I had my first story published, back when I was an idealistic, slack-jawed, wannabe writer. In the intervening years absolutely nothing has changed, but the stories of Richard Brautigan somehow offer comfort to my soul, soothe my tortured ego, whisper in my ear to keep going, keep pushing out like slime mold on a tattered oak. Brautigan, and in particular his 1971 collection of micro-fiction (in the days before it was hip or relevant), Revenge of the Lawn, has been one of the constant forces in my life ever since. Brautigan was the perennial West Coast outsider, caught in the crack of  zeitgeists, between the Beats and the Hippies, too syrupy and whimsical for the former, too wistful and introspective for the latter. His reputation soared for a few short years with the publication of the seminal and genre-walloping Trout Fishing in America, but it fizzled out as soon as it got going. It is the stories contained in Revenge of the Lawn, many barely longer than a page, that, in my opinion, establish Richard Brautigan as one of the great stylists of modern American literature. They are offbeat and direct, absurd and sad, replete with non sequiturs and crazy metaphors. There are stories of plumbing being replaced with poetry, beautiful women compared to the arrival of rural electrification, There are more traditional set pieces about hunting trips into the woods of the Pacific Northwest and then there are 3-sentence speculative asides about the murder of a violinist living in the apartment next door. Brautigan was known to play fast and loose with plot, but the backdrops to his stories are vibrant and powerful in contrast. Many of the stories center around the rain of his troubled Washington upbringing, in the strange time before and during the Second World War, right up to the anything-goes possibilities of 1960's San Francisco. It is true, Richard Brautigan may have had a childlike view of the world, a naivety to the point of unsophistication (the poet Lawrence Ferlinghetti famously said he "always waiting for Richard to grow up as a writer") but in this era of self-aggrandizing and navel-gazing and literature as serious as a Sunday afternoon at your granny's, a Brautigan story is a shot in the arm, a poke in the eyes, a reminder that the world is an odd and wonderful place, to chill down and have a little fun with it from time to time.

Aidan O’Donoghue was born in 1980. His fiction has appeared in The Los Angeles Review, The Stinging Fly, The Tangerine and The Moth and his story A Norwegian Stove can be found in the new Summer Fiction issue of The Fiddlehead. His poetry has also been published widely. He is working on a novel and a short story collection. He lives in Cork, Ireland with his wife and two children.

Order your copy of the Summer Fiction issue today!

Permalink Submitted by Ross Leckie (not verified) on Tue, 09/07/2021 - 18:29
I'm delighted to see Revenge of the Lawn get its due. I was talking to Mark Jarman the other day about Brautigan, what we enjoyed in his work. I taught an entire course on his work back in the Seventies. To quote the old song: "I second that emotion."