Betwixt and Between: A Review by Ian Colford of Brian Thomas Isaac's "All the Quiet Places" 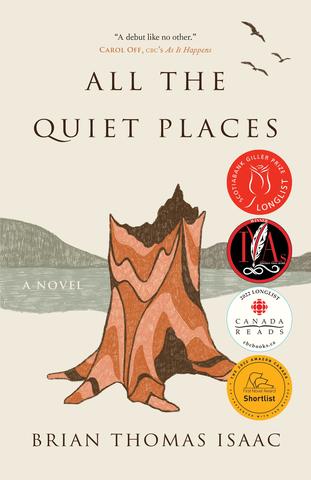 The story begins in 1956, when Eddie is six. Eddie’s family (which also includes his grandmother, who occupies a separate nearby dwelling with her son, Eddie’s uncle Alphonse) resides in a remote corner of the reserve, surrounded by nature. Close by is the Salmon River, which forms the border between the indigenous community and the external world of white hegemony. The area is truly isolated — to the extent that their house lacks basic services such as plumbing and electricity. But it is where Grace has chosen to live in order to shield her children from the complications and pitfalls of reserve life. Their nearest neighbours are the Cluffs, a white family.

Even at a young age, we see that Eddie is developing an awareness of the social conflicts and cultural pressures that will present challenges as he grows older. He is soon to start school. There is a residential school near the reserve, but Grace has decided that neither of her sons will go there, having been warned off the place by her brother Alphonse, who seems to suffer from a debilitating form of PTSD resulting from the horrors he encountered and the abuse he endured while at the school. Instead, against the advice of the government Indian agent who checks in with her from time to time, Grace has arranged for Eddie to attend the white school located in the town of Falkland, a bus ride away. Having convinced herself that it’s the only way for them to find success, she wants Eddie and Lewis to grow up familiar with, and ready to compete in, the white man’s world.

Eddie’s last summer before school is one of adventure. Without warning, Grace’s friend Isabel arrives at their home with her boyfriend Ray. The two have a son, Gregory, and within minutes of their arrival Eddie and Gregory have formed a bond and are well on their way to becoming friends. Ray, impulsive but a hard worker, knows how they can make some money, and it’s not long before the family, including Grandma, are packed into Ray’s car and heading south to Washington State, where the younger adults spend long days sweltering under the sun working on a fruit farm. Eddie and Gregory get up to all kinds of hijinks and some mischief, most of it innocent, but the summer adventure ends in tragedy. Eddie, Grace and Lewis return to their home under a cloud of sorrow and Eddie prepares himself for his next chapter, attending school off the reserve.

Eddie’s early years are marked by the chaos wrought by the adults in his life. For all her good intentions, spirited independence and firmly held beliefs, Grace’s stewardship of the Toma household is not always steady. She is often at the mercy of an erratic temperament and swayed by a deep ambivalence toward her Indigenous heritage. Eddie and Lewis suffer the effects of her poor judgment, and the worst decision she makes is allowing Eddie’s father, Jimmy, back into their lives. Eddie has never met his father and finds the man’s volatile presence in the house unsettling and confounding. A shiftless dreamer with a violent streak, Jimmy settles in and dominates Eddie’s home life while Grace stands by and watches it happen. There are good days and bad, but the good days are fleeting, and before Jimmy runs off for the last time, he becomes an adversary.

School is not easy. Eddie, a passable student, is one of very few Indians at the white school, which makes him a target. Forced to defend himself on an almost daily basis, he makes frequent visits to the principal’s office. But guiding him through this period of his life is his neighbour, Eva Cluff, a couple of years his elder. Eva’s friendship and soothing presence calm his soul, and later, when he reaches his teens, Eddie is smitten. But where Eva is concerned, he is timid and insecure. He seems to know without being told that their differences make a relationship impossible. And then, just as Eva indicates that his feelings for her are reciprocated, tragedy strikes again.

Eddie Toma is an appealing protagonist with whom the reader sympathizes deeply, and Isaac’s unadorned prose is powerful and direct. But Eddie’s story is not a happy one. All the Quiet Places tells a moving tale of marginalization, loss and neglect. Born into an inhospitable world where effort is rarely rewarded and misfortune and calamity seem inevitable, the challenges Eddie faces are profound. Even so, Brian Thomas Isaac has written a novel that is not entirely lacking in hope. Eddie finds solace in nature and in his grandmother’s spiritual teachings. These give him an inner strength and a quiet dignity sufficient to endure the worst of what comes his way. Yes he is still very much betwixt and between: an Indigenous boy thrust into the white man’s world and left on his own to sink or swim. The odds, it seems, are stacked against him.

The novel ends ambiguously, with Eddie holding his fate in his hands. At that point — after everything he’s been through — all we, the readers, can do is hope he makes the right decision.

—Ian Colford’s
book, Witness, will be published by The Porcupine’s Quill in 2023.