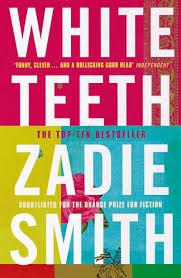 I know, I know: I can hardly believe it either. We have to wait another two months for the next issue of The Fiddlehead?! That’s unbearable! Insurmountable! Simply and indefatigably inconceivable! Woe is us.

After tiring of twiddling my thumbs and obsessively checking my mail box, I’ve ventured out into the big bad world to find other ways to while away the time. While strolling the aisles at my local bookstore, I ran across a most peculiar invention called the “novel” (pronounced: naahhh-vuuul). From what I can tell, it’s like an issue of The Fiddlehead, except longer and with only one story; strange stuff (this must be one of those silly side projects authors take on as a reprieve from the serious work of writing short stories). One naahh-vuuul in particular caught my eye: White Teeth by Zadie Smith.

I thought White Teeth was a DIY book about dentistry; what I found instead was one of the most nuanced and sophisticated representations of contemporary immigrant life that I’ve read thus far. Commendations on the novel’s thematic triumphs need not be contrived by this humble author as institutions such as The New Yorker, Guardian and Financial Timeshave safely lionized this text as one of the most celebrated of the past two decades. But the most striking yet undervalued aspect of White Teeth, from my reading, is Smith’s awareness of the constrictions placed upon writing by those reading it — of the insistent and insufferable question demanded ad naseum, “but what does this mean?"

Smith toys with this nagging demand of the salivating critical public when she writes, “Clara Bowden was magnificently tall, black as ebony and crushed sable, with hair plaited in a horseshoe which pointed up when she felt lucky, down when she didn't. At this moment it was up. It is hard to know whether that was significant.” And that’s it. No rumination on the direction of her hair foreshadowing the direction of her fate, no subliminal message hidden beneath the rough plats of her horseshoe ‘do. And what a fresh breath of air that is.

Don’t misunderstand me: a story must certainly possess artistic merit and thematic gravity to make it memorable, but too often readers (including myself here) ascribe capital M “Meaning” to every single detail, searching for depth where there is none. In this day and age where cultural phenomena such as “Jersey Shore” and “The Real Housewives of Atlanta” have become standard forms of public entertainment, it’s understandable why some seek to ascribe significance to every witty turn of the pen – to which Smith’s White Teeth responds with resounding hilarity: for the love of all things literary, just relax.

Sometimes, a writer isn’t trying to educate you. Sometimes, all they want to do is entertain you. So let them.