With Earmarks of Memoir: A Review by Susan Haley of Kelley Jo Burke's "Wreck" and Michelle Porter's "Approaching Fire" 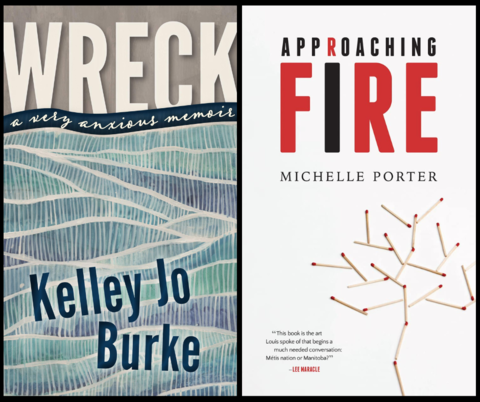 With Earmarks of Memoir

I used to ask my creative writing class on the first day, “Are you interested in writing fiction or memoir?” But I gradually came to realize that there is no real difference, that the same bag of tricks is used in both, dramatic irony, dialogue, characterization, switching temporal order. The question is only how much truth you want to stir into the mix — or perhaps I should say, how much you dare. These two books take two very different approaches to what we seem nowadays to be calling “creative non-fiction.”

Is Wreck a memoir or is it a novel? Or somewhere in between? In the riddling “About the Author” that serves as the preface Kelley Jo Burke says she is a liar, a recovering liar.

The rather wonderful author bio on the last page (160 — this is a short book), which says she has been a CBC producer, playwright, author of four books, winner of numerous prestigious awards muddies the waters even further. Can this accomplished writer really be the wreck of the title?

This does not seem at first to be a particularly tightly written book. It circles and circles back around the author’s early childhood memories of her grandparents’ cottage “at the lighthouse,” the Nubble, a famous lighthouse on the New England coast, perched upon a small island.

It is the grandparents whom the nostalgia — or is it instead a kind of terror — focusses upon, the gentle anxious grandmother, Teen, and the irascible violent grandfather. When she grows up, she pays this cottage two visits. In 1996, she throws her recently deceased grandmother’s collection of whale figurines off the rocks into the ocean, in a symbolic gesture of — what? We are not sure.

The early parts of the book are in a way the biography of the author’s anxiety.

She is groping to find the origins of this anxiety in her (quite conventional) upbringing, her father one of the American academics who migrated to Canada, her mother’s family, buttoned-up old New England stock, who look down upon the Irish in her father.

Kelley Jo depicts her family as “the Addams family” of Winnipeg. “Odd, that’s how I remember us.”

They were violent children.

Kelley Jo’s father dies of a brain tumour in what was evidently a protracted and very difficult time for the family. Her brother dies while still in his 40s.

There is a quite surreal and hilarious episode where she renounces her American citizenship. The disbelief of the American authorities is the centrepiece in this vignette: “Sugar, once you calm down we both know you’ll change your mind.”

America seemed to see my Canadian citizenship as an act of treason when I was dealing with the minions of Bush Jr. This time I’ve              not only said yes to Canada, I’ve said piss-off to the U.S.

Kelley has a patient loving husband, Eric, who is really there for her, in spite of her disbelief that this could be so, her crippling anxiety. It is he who goes with her in 2018, back to the cottage at the lighthouse, where she finally comes to terms with her memory of her grandfather.

Up to this return and final visit, the book has all the earmarks of a memoir: a meditation upon events of the past, not necessarily in temporal order, but as they come up for the author, and a kind of “warts and all” self-description, through which they are filtered.

But the last part of the book begins to have some of the dynamics of a novel. How did it really work out in 1996, when Kelley visited her grandfather after the grandmother’s death? He was already in the grips of some form of dementia.

Did he ask: “Could I come up they’uh and live with you?” Did she take him home with her, and look after him till he died?

He’s a pissing, mean horrorshow, but everyone knows what you have to do when you have a sick old man alone and howling.

She makes three stabs at telling what happened here. And then comes the story she has been withholding all along, the way the beloved grandmother died.

I liked this book better and better as I read along, as I began to see where the author was taking me, that it was not just an exercise in self-absorption. (This is, after all, a criticism that could be levelled at any memoir.) But I think I should offer a kind of trigger alert: “Some readers may find this material disturbing,” or some such formula. The no holds barred approach she takes to her personal attributes and her sex life may offer more information than many readers are able to tolerate.

Approaching Fire is also a kind of memoir, but takes a very different approach. This book has more of the modern creative nonfiction piece than the novel about it. Michelle Porter is tracking down the musical career of her great grandfather, Robert Goulet, a Métis fiddler who was a performer and recording artist in the 1930s.

Curiosity started it all. All my life, I wanted to know why you — great grandfather, Pépé, Bob — moved away from Manitoba. It was                where your music was born; it was where all your relations lived. . . . I couldn’t understand it.

Porter begins looking for Bob Goulet, through the fragmentary bits and pieces that remain, a few old programs, newspaper pieces, the record labels and the records she is able to retrieve, memories of him preserved by her aunts (and she comes to realize how much material was disastrously burned by a great aunt.) There is a very effective use of some of this material to illustrate the text.

But almost with the very first pages we realize from some of the clippings she has to exhibit that the search for Robert Goulet is going to take her into the very dark place for the Métis after the Riel rebellion, when the Canadian West was settled by hordes of newcomers buying up land from unscrupulous developers.

Some say the Métis

That’s the story about Métis
that was convenient

for stealing the land.

This brings her to the terrible story of Robert Goulet’s uncle, her great grand uncle, Eléazar. At the behest of a military expedition sent by Ottawa he was chased into the Red River by a band of vigilantes and drowned, after being knocked unconscious by the stones that were thrown at him as he tried desperately to swim away.

Why did Robert Goulet abandon his career as a musician in Winnipeg, the place where the music came from, and take his wife and family to live on a homestead in British Columbia, never to perform again. Possibly in old age he even sold off his fiddles, or someone did.

The author herself begins to ask, why am I not there now too? Why do I live in St. John’s, very far away from my roots? Why didn’t I know my own family history? And why am I finding it in only these few fragmentary pieces.

Michelle reads an article in a magazine about a scientist named Kira Hoffman, who is researching the ecology of fire. And she begins to bring this together with diary entries from another ancestor, her great great grandfather’s brother Louis, who was buffalo hunting on the prairies in 1868, in one of the last Métis buffalo hunts. There’s a grass fire which eventually surrounds them and they have to drive their wagons into the muskeg to try to wait it out, making a hair-raising escape.

As we now know, the native people of North America used fire as a way of managing their environment for millennia, and this is part of the heritage of the Métis too. The vast buffalo plains were partly created by fire, and maintained and managed by the human use of fire, just as certain forests could not exist but for the fire heat that germinates the seeds. And as we have discovered, our prevention of forest fire in the interests of conservation has made us much more vulnerable to fire — the giant fires of our time.

I found the material presented in this book interesting and touching — sometimes also, as in the story of Eléazar — truly horrifying. I liked the approach, especially in the beginning: the presentation of the fragmentary historical materials relating to Robert Goulet’s career, together with the ominous repetition of the advertisements for the sale of Métis scrip. The poetry sometimes worked as poetry and sometimes did not, but it functioned as a good shorthand way for the author to remove herself from direct storytelling and make her own comments.

The diary entries relating to the fire around the muskeg were very gripping, and I wondered why we didn’t learn more about Louis Goulet. But the fire that nearly kills Louis is a prairie wildfire, and its relation to the rest of the book, even to the subject of Métis fire management, is tangential.

If I have a criticism of this book, it is that I didn’t think that Michelle brought all this material together with complete success. It’s possible that this is because she doesn’t take direct personal possession of the storyline. Unlike the memoir presented by Wreck, where the author opens up the Pandora’s box of her neuroses, in Approaching Fire we don’t really get a feel for who Michelle is herself.

This is the challenge of this type of non-fiction, to develop a persona who is portrayed deeply enough to engage us and then to induce us to follow the wandering thought processes, the self-discoveries, and epiphanies. The stars in this firmament, like Rebecca Solnit and Peter Mathiessen, can put together any group of disparate things and we will fly with them wherever they want to take us. Neither of these books reaches that supersonic achievement, but they are both certainly well worth reading.

— Susan Haley
is attempting to write a book in this genre.

Click here to order your copy of the Summer Creative Nonfiction issue!