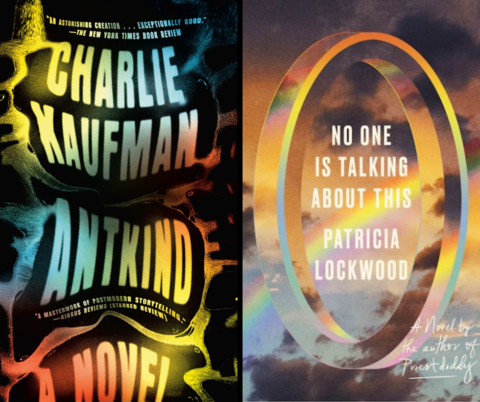 In one corner, the boxy size of a dictionary and weighing in at 2 and a half pounds (1.3 liters, I think; I'm not good at metric conversion) and 705 pages—Antkind, by movie director and screen writer (Being John Malkovich, Eternal Sunshine of the Spotless Mind, I”m Thinking About Killing Myself) Charlie Kauffmann; and in the opposite corner—poet and memoirist (Priestdaddy, Motherland Fatherland Homelandsexuals, Ballloon Pop Outlaw Black) Patricia Lockwood's No One Is Talking About This, tipping the digital scale at just over 1 pound (a couple of deciliters) and a delicate hand-sized 200ish pages.

The two increase the number of bodies the already polymorphously philoprogenitive (props to T.S. Eliot) soul of the novel can inhabit; neither arrives with 2 legs, 2 arms, bilateral symmetry,  a nice worsted suit or silk sheath, or any of the conventional drapes of “narrative.”

Kauffman's shaggy, maximalist Hulk of a novel reminded me of Harry Potter's spell book, which has to be tied shut to keep it from attacking other books and its owner-keeper, and blows through every stop sign of narrative structure, chronology, character, voice, POV, setting, and plot; to paraphrase a famous movie quote, it wasn't published--it seems to have escaped. Opening it is like cranking up a meth-smoking Ancient Mariner with a tale to tell of movies, life, death, birth, movies, infinity, movies, love, political correctness, parenthood, war, race, sex and gender, capitalism, politics, movies, the distant future, and movies. And Donald Trump.  And it's hilariously, hyperbolically, transgressive and will outrage more than a few readers.

Lockwood's lapidary, meditative, coruscatingly courant, achingly self-aware meditation is a field of white linen archival artist's paper, arrayed in rows with polished agates, none bigger than a thumbnail, with different stones glinting at different times, like a digital  message board on which appear sentences, 1 word at a time, set against a carillon of phone ring tones and sounds, a peal ringing the changes until all combinations have stopped echoing on the final page. Everything here is DMs from a speaker with one foot in, one foot out, of the Portal—the liminal entrance to the brave new world of online life and digital media culture, where the speaker has lived and now, maybe, doesn't. And Donald Trump's in it. And while it's sardonic and observationally witty, it's not comic and not hyperbolic, and is itself quietly outraged.

Film director vs. poet, or film vs. poetry, or male vs. female, or Gen X vs. Gen. Y or maybe it's the material, or all of the above? Whatever. Let's leave it at--2 different mammals each sending a signature barbaric yawp across the rooftops of this world.

The 2 authors hustle out to meet in the middle of the cage--and shake hands and just plop on the canvas and start chattering excitedly to each other, and laughing to beat the band. And: fade to black, but then a dolly-back to show that the black is the pupil of an eye, and in it reflected are 2 tiny figures, talking and talking, waving their hands excitedly, both ignoring the eye.

Before the throwdown even began, it was over. The crowd is booing.

Ed Taylor is the author of the novel Theo, the poetry collection Idiogest, and 3 chapbooks. His prose and poetry appear in a variety of U.S. and U.K. periodicals, and his occasional work in other media includes the 2020 1-act play “Black Nikes." His essay "Combover" was published in the Summer Creative Nonfiction issue of The Fiddlehead. His Instagram is @toothlessmurgatroyd.