Hiding (From) Ourselves: A Review by Nadine Bachan of Shani Mootoo's "Polar Vortex" 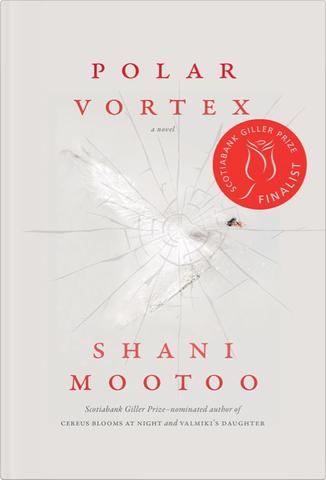 Priya awakens from a feverish sex dream with feelings of regret. Priya’s marriage to her wife Alex has become troubled, their tension predicated by the re-emergence of Prakash, a friend from Priya’s past. She and Prakash have known each other since university. The margins of their friendship had been challenged by Prakash’s unrequited romantic feelings, so much so that Priya cut all communication ties with him when she met Alex. When Prakash finds her via social media after a six-year silence, her emotions take over and she is
compelled to invite him to visit her in the country home she shares with Alex. Still throbbing, Priya knows it was Prakash she’d dreamed of so passionately.

Mootoo’s prose is imbued with intention and sensible perspective that makes each character sympathetic, even as we watch them make self-serving and destructive choices. Although Priya is seen from the outside as aloof and distant, the fluid narrative reveals her scrutinizing nature. Her push-and-pull of emotional avoidance and anxious observation create a tension that is palpable
throughout the novel:

She reads fast. I have accused her of skimming . . . I count seven seconds, and as usual, sure enough, there’s her finger, a little hammer, coming down again, a perfect rhythm. . . .
She is so absorbed in her reading that she doesn’t see my movements in the kitchen. This is probably not her first cigarette of the day. I so need to keep peace with her, but there is that little flicker of irritation, anger even, inside me, and I want to march out there and ask how many she’s already smoked for the morning.
One. Two. Three. Four. Five. Six. Tap.
I remain as much out of sight as possible and pour myself a cup of tepid coffee, but it is impossible to hide entirely. How can she be so absorbed that she isn’t bothered by any movement in her peripheral vision? (98-99)

Priya’s characterization acknowledges the ways she is Other without essentializing her. She is a Trinidadian of Indian heritage, a lesbian, part of an interracial marriage with a white woman, an immigrant, and an artist, but she is more than the sum of these parts. We are ensconced in her thoughts about all the ways she has connected with both Alex and Prakash, but also those ways she remains uniquely apart from them.

I must confess, as an Indo-Trinidadian myself, that these sentiments resonated with me deeply, as did many of the moments in which Priya contemplates her Trinidadian identity as a way that othered her from the groups of people with whom she had interacted over the course of her life, including Canadians, other immigrants, other queer women, “real” continental Asian Indians.  When Alex’s perspective takes over the narrative, Mootoo shows us the vulnerability of Priya’s cultural seclusion, but also the other side of that coin, through Alex’s honest voice:

She was outnumbered. Those gatherings were about our similarities, not about our differences, and often what she interjected was amicably nodded at but not engaged with — poor things, I could see our friends didn’t even know what questions they could have     asked of her — and so we’d return to want bonded the rest of us . . . It was tiring, though, to have, once we were back home in our private space, to commiserate with her against our friends. It made me have to acknowledge their failings, too, and this was isolating for me. When you live with a person of colour, never-ending problems that centre on how the world treats one and not the other enter your house, and these differences can alienate you from one another. And your house becomes not a haven in which harmony can be sought, but a refuge in which to hide. It gets unbearable when you’re hiding not together from the world, but from each other. (194-195)

Therein is the heart of this novel: everyone is grappling with their own secrecies. Priya is ever-concerned with calculating her actions and reactions to the people around her, always aware of how she is presenting herself, and worries — in differing degrees and for a myriad of reasons — that she might reveal herself in an unfiltered way. Her words and actions betray her apparent need to be in control and reason away her doubts, fears, and confusion. Alex, too, is holding back. However, from the onset of this story, her annoyance and probing questions regarding Priya’s past with Prakash indicate that her temperance is being pushed to its limit. Even Prakash, who presents himself as an open book from the moment he enters the present-day narrative, is struggling to keep a lid on the thoughts and feelings he has suffered with for years.

Mootoo does not rely on ostentatious emotional displays nor harrowing crises to drive these characters forward. Priya, Alex, and Prakash are afflicted by both known and unspoken histories and intimacies, we see their collective brooding. Though the final revelation may not come as a surprise to some readers, the journey to the novel’s conclusion is no less engaging. Polar Vortex is a richly introspective and sobering look at how relationships — and our perceptions of them — constantly evolve and affect who we were, who we’ve
become, and who we might be, despite our best efforts to deny that power.

— Nadine Bachan
is a writer currently working on a collection of personal essays and a series of linked short stories.