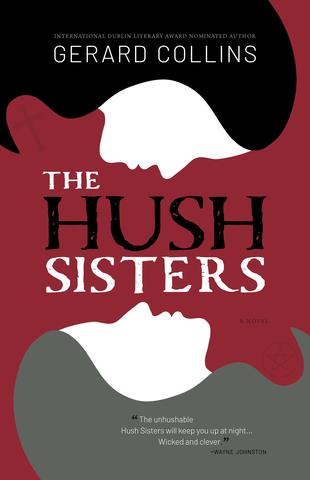 Divorced and sliding into early onset spinsterhood, antique seller Cara ‘Sissy’ Wells (née Hush) is anchored to a stately but decaying manse in St. John’s, Newfoundland. Following her father’s recent death, Sissy is now the sole living inhabitant of 333 Forest Road, her roomies a pair of resident ghosts. With its “door the colour of blood” and overgrown yard, the house, in the words of a realtor, is “Amityville Horror, all the way.” Despite her quiet tea-drinking demeanour, Sissy is capable of killing a finch by “twisting its neck, to end its suffering, and maybe her own,” and, as an avid reader of horror novels, her perspective is unabashedly gothic: “the fog often fell upon St. John’s Harbour like a wolf that preyed upon a lamb — stealthy, sudden, and inescapable.”

Cue Ava Hush, the glamorous older sister who blows into town determined to cajole or bully ‘Sissykins’ into listing the House of Hush. Fired from her film industry job in Toronto, Ava wants a share of the money to be made if her sister will sell the family home. Ava’s agenda includes excavating a sordid familial history, and despite a warm reunion, a contest brews as she campaigns against Sissy’s resistance to selling the house and her refusal to discuss “the hard topics”:

“Some places are born with rot in their foundation, Sissy, and that
rot just grows bigger and consumes everything in its path, until
every person who steps inside it becomes part of the rot. Secrecy,”
she said. “That’s what does it: not the secrets, but the secrecy.”

One of these secrets is the whereabouts of Sissy’s ex-husband Harry, a scholar of Gothic fiction who hasn’t been seen in the two years since he served her with divorce papers. Ava claims to have sighted Harry’s ghost upstairs and insinuates that Sissy is hiding some sinister knowledge regarding his fate, while Sissy accuses Ava of trying to scare her into selling the place.

If this premise sounds familiar, that’s because Gerard Collins’s novel has in its DNA strands of the 1959 melodrama Hush, Hush, Sweet Charlotte. While this resemblance to the movie anticipates a particular plot line, Collins’s method leans toward foreshadowing followed by deflated expectations as he reels the reader along with red herrings and deferred revelation. In one scene the sisters rush upstairs to investigate shuffling sounds from Sissy’s bedroom, the space suddenly infused with a stench of “dead rat,” and watch through the window as Hitchcockian flocks — “dozens of pigeons, a few gulls, a variety of sparrows, robins, a lone blue jay and several other birds” descend on some “kind of carrion . . . splayed on the ground.” They race back downstairs to . . . sit at the kitchen table and natter over yet another cup of tea?

This blasé acceptance of supernatural events undercuts the scare-factor, yet Collins is capable of creating spine-tinglers, and sound effects from the horror playbook are skilfully deployed as the poltergeist activity amps up; in a later bout of overhead thumping, the sisters are less sanguine upon hearing a “ruckus . . . followed by a series of low taps, then a brief dragging sound as if a sack of potatoes was being jerked across the floor.” The story is flocked by all species of allusion, and includes an exorcism performed by Uncle Cotton in the ominously named “baby’s room,” portal to the dwelling’s dark heart and housing a cradle fit for a prop in Rosemary’s Baby.

Another ancestral text imbedded in Hush’s structure is Jane Austin’s mock-gothic romance, Northanger Abbey. Austin’s heroine Catherine Moreland, addicted to ‘horrid’ novels such as Mrs. Radcliffe’s Mysteries of Udolpho, is a prototype for Cara/Sissy, whose reading preferences run to Shirley Jackson. Instead of dance cards at Bath galas, it’s drinks at Finnegan’s Pub chaperoned by Ava and neighbour Brittany, whose charming Irish cousin Angus Boggart is frontman for the house band (boggart: a malevolent spirit — you might want to Google it). Enter the romance genre of uncertain affections and misdirected jealousy, and, like those conjured by Catherine Moreland, fanciful terrors where, through the mediating prism of Sissy’s imagination, a visit to the cemetery invokes hands reaching up from a grave as in Carrie or a night stroll on cobblestone evokes Jack the Ripper’s London.

Again, these distancing techniques forestall any terror that might reside in the locations. References that would be visually cued in film can seem baldly signposted in text, for instance a nod to Charlotte Perkins Gilman’s story “The Yellow Wallpaper” telegraphed when Ava warns Sissy that she’ll “fade into the walls like one of those fucking yellow flowers all over the halls and the baby’s room.” Such intrusions are balanced by subtler moments organic to the story and its setting, as when Angus takes Sissy to view the SS Kyle, a grounded ship whose stasis is metonym for Sissy’s own inertia. In another decidedly local flourish, the music that jolts the sisters awake in the wee hours is not discordant, crashing ragtime piano but a stereo blasting Alan Doyle’s rendition of “Berry Picking Time.” In Northanger Abbey the tonal transitions from gothic parody to realism are smoothly orchestrated, but in Hush the swings from creepiness to camp can be disconcerting: just how is the reader meant to feel — like Sissy, scared shitless and bemused at the same time?

While the push and pull between the siblings initially lacks drama, their circular bickering diluted by endless cups of peppermint tea, tensions ratchet up as Ava’s repressed anger builds in the face of Sissy’s defensiveness, until resentment and survivor guilt culminate in accusatory scrapping worthy of a deranged Bette Davis bitch-out. A shifting point-of-view exposes triangulated relationships and facilitates excursions into the past as each woman summons a traumatic childhood; these flashbacks provide scenes of chilling psychological realism that play against the meta-textual frippery, ballast for the book’s black soul. Collins’s storytelling strengths are impressively realized in his depiction of the brusque, detached tenor of Sissy’s relationships with her late parents: an image of her mother in the garden holding “wide-open shears that were as big as a condor’s beak” reads as sinister rather than overdetermined, and Sissy’s recollection of her first menstrual period — that “weird discomfort of sticking a piece of cardboard inside herself” — is convincingly and empathetically rendered.

Set against a maritime history of boom and bust, there’s a subtext here that gestures toward economic gothic. The “Sisters Hush” can agree that their demonic father Eddie Hush was of a piece with his “whole generation — all the best jobs, benefits, trips, and insurances, then spent it all and left nothing for the next crowd.” The locus of his moral and financial bankruptcy is the grand family ‘castle’, and Hush could serve as a cautionary tale for Canadian real estate buyers: do not sell your soul or your first-born to pay the mortgage.

Eddie’s motivations are disclosed in dispensations of back-story that sometimes tangle the thread of revelation, and descriptions of his business life, if situated earlier, might have better served the portrayal of his character. Some other elements feel out of order — Sissy, for example, is the centre around which the manse’s malevolent energy coheres, yet there’s little physical description of her until she appraises herself with a glimpse in the hall mirror one-third of the way into the story, many pages after Ava’s entrance in a black velvet cape and pentagram necklace. However, these are minor detractions from a juicy plot structured in contracting circles of revelation that keep coming long after what Ava will call “The Night of Infinite Confessions:” the real horrors are worth the wait. If the novel at times overwhelms itself with meta-elements culled from literature and film, that is in the spirit of gothic excess, and Collins’s gambit succeeds. There be monsters in this mash-up, a sui generis portrait of trauma survivors and the lingering impact of family violence in adult siblings. One hopes there’s a Scary Movie-style screenplay in the works — The Hush Sisters would make a great film.

— Catherine Greenwood
is a PhD candidate at U of Sheffield pursuing an interest in Gothic poetry.