John Barton: Gay Canlit Icon: A Review by KIRBY of John Barton's "We Are Not Avatars" 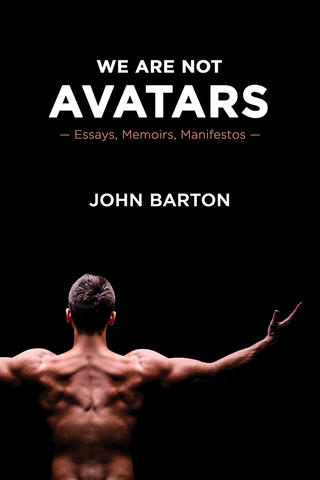 We Are Not Avatars, John Barton. Palimpsest Press, 2019.

When I told a friend I was about to write a review of We Are Not Avatars (Palimpsest Press, 2019), a collection of John Barton’s essays, memoirs, and manifestos, they looked at me quizzically and suggested I’d set myself on an unrealistic challenge, for how can anyone critique an icon? My friend gave me pause because I never considered John Barton to be one.

This is exactly how Barton opens his review of Pat Lowther’s Time Capsule (Polestar, 1997), and while I’m somewhat familiar with Lowther’s work, I too wondered how/why The Pat Lowther Memorial Award celebrating the ‘best book’ of poetry by a Canadian woman was decided upon by the League of Canadian Poets. The League refers to “an untimely death” on their website. . . not that Lowther, co-president of the League circa 1975, disappeared only to be found murdered by her soon-to-be-convicted husband.

“A violent death felled Lowther when ‘she was on the edge,’ we are told in the jacket copy of 1977’s A Stone Diary, of whatever fame and success Canadian
poetry has to offer.”

“‘Whatever’ is the operative word.” Barton full stop. Differentiating between “a compelling myth,” and a historic present.

I remember being seated in Jackman Hall when Patti Smith was asked how she lives with all the myth that surrounds her. “Myth?,” her eyes widening, “what the fuck are you talking about? I’m a single mom raising two kids!”

So, who is John Barton, the gay man and poet, and what are his concerns? What can the reader glean from We Are Not Avatars about his aesthetics?

How well did he write?

It is this question, and this question alone, that is all-pervasive throughout Barton’s life/work as a writer of 11 books of poetry and editor over the span of two decades at two of the most prestigious Canadian literary magazines Arc Poetry Magazine, and The Malahat Review.

And, apparently he’s a big fan of contests and awards, co-founding the “Poem of the Year” at Arc, and receiving a number of prizes himself, as well as his current stint as Victoria’s Poet Laureate.

None of this was simply bestowed upon him. The man writes. And works. And edits. And writes. And aims to write well and is very particular on what constitutes good writing: a level of professionalism that Barton pines for in his essay, “Where Have All the Poets Gone?” (233) — or, as a fellow editor suggests, the “real poets” — and while not owning up to that Barton does feel a duty “to live up to its [Malahat’s] decades-long reputation for publishing “the best that the country has to offer.”

Ah, that elusive quantifier, “the best.” And, who decides.

“By no means do I want to cast aspersions on the work that is sent in for consideration to The Malahat, especially on those poems that it does accept. Still, how can I not help but wonder as to why the unsolicited submissions of poetry seem so thin these days? While our ‘established’ poets nurse their wounds and embroider their scars [John?], have our ‘emerging’ poets found new, more immediate, and satisfying ways to converse with their audience through e-zines, blogs, listserves, and social media sites that have a breadth of reach unimaginable to [Harriet] Munroe’s time, let alone fifteen — or even five — years ago?”

Or that the lit mags themselves have become so pricey that even the poets in print take a picture if/when they can find one at their local indie shop to post while waiting for their contributor copies?

The real gift of Barton’s work here is a detailed concise recent history of CanLit uniquely told through the eyes of a Gay White Male poet and influencer, with many of his best essays in its opening section, “Men of Honour,” Barton writing at a time when the mere hint of homoeroticism inspired controversy and the heavy slant towards “universality” [not difference] was deemed acceptable, fit to print, read, discuss. He wonders, as I do, who of his non-gay contemporaries reads him and how they read him.

“As a queer writer of emphatically homoerotic texts, I have often felt marginalized and made to feel that what I write about is not the common ground most readers expect to find beneath their feet. Some publishers once shied away from the G word in the materials they prepared to promote my books, worried that the use of it would compromise sales even more in the already small poetry market.” (65)

Funny how things circle around marketability trends, again and again.

Having studied with Joseph Brodsky during his master’s at Columbia University, Barton speaks nearly reverentially of poets/writers he upholds, often wondering how they might read him, especially since coming out. As biographer, speaking of his lifelong connection to Emily Carr,

“Would she consider me a good person? How would she judge me for being gay, a homosexual, or whatever moniker she would have used to describe a man like me? Would she question my right to tell her story?”

Barton comes out a second time, as one who lives with chronic pain, written here in diary form, “outtakes” he refers to as “The Pain Closet,”

“Life is something I must strive to live despite pain. Pam once told me that many of her patients could never bring themselves to adopt such an expansive outlook. They allow daily life to become small and drugged up, detached from the passions that once fuelled them. I’d rather be in pain and happy than in pain and not. Chronic pain has become my vocation with the same odds for success or failure that poetry has. With both I take the long view.”

The long view. Something sorely lacking in much writing these days.

My first encounter on the page with Barton was the infamous, first-of-itskind anthology with the sexy AF cover by bad boy of the of the moment, artist Attila Richard Lukacs, Seminal [co-edited with Billeh Nickerson] contains work of virtually every gay poet name-drop of the time: bill bissett, Robin Blaser, John Glassco, Stan Persky, Andy Quan, Dennis Denisoff, Ian Young, R.M. Vaughan published by that bastion of queer writers and their kind, Arsenal Pulp (2007), and returning to it again and again to this day speaks to the qualities of the editors commitment and vision to create an essential volume of work, in many ways, a companion to We Are Not Avatars.

Barton moves it forward by writing endearingly of two new [award-winning and decidedly different] gay poets, “Approaching Utopia: The Poetries of Billy-Ray Belcourt and Ben Ladouceur.” I recall my own deep excitement at the outset of these two what felt like momentous ground-breaking Canadian collections. Why? Because they were unapologetically gay, and young, and fresh, and good, and spoke to me and held such promise. My eyes water at the promise.

Returning to his Carr essay,

“We all hope that those we love will favour us with returned affection, that they will see something of themselves in how we see them.”

Barton is without question academically, search-worthy ‘substantial’ and I would even say one of the primary shapers of what we refer to as CanLit today. It is for this reason, We Are Not Avatars is an essential read.

That, and he writes really well.

Kirby's review of We Are Not Avatars

Permalink Submitted by Arleen Pare (not verified) on Mon, 10/31/2022 - 16:53
Splendid, Kirby. and many thanks. John is such a good writer and deserving of such excited and thoughtful attention. Arleen xoxo