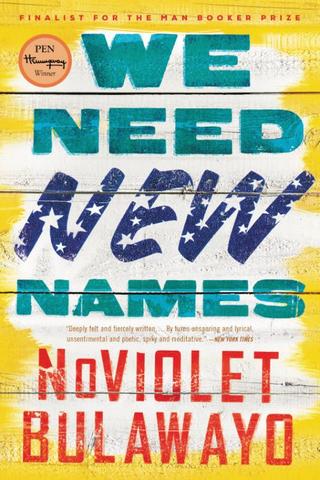 After borrowing We Need New Names from the library and renewing it until I couldn’t anymore, I bought a copy, and so had the luxury of time to re-read passages, the freedom to triangle-fold the paper corners of pages I wanted to return to. The novel is constructed like a short story collection, each section standing alone, creating space for readers to catch our breath. This is a book to linger over.

The story begins with bold children stealing guavas from the trees of the wealthy neighbourhood in tumultuous post-war Zimbabwe. The children have seen their middle-class neighbourhood bulldozed, their parents broken. Now they live in tin huts in a shanty town called Paradise. These children know justice intuitively, and are clear about what is owed to them: guavas and freedom and more.

They also have the best names that I’ve seen in print: Darling, Stina, Chipo, Bastard and Godknows.

Children have the ability to focus in on the small things, observing the sometimes incomprehensible world of adults. We Need New Names shows how a child’s character in fiction writing allows us to see the things that are closest to the ground, the most true. Bulawayo describes human tragedies — displacement, colonization, political upheaval, immigration — detailed in a way that makes the injuries sharp again.

With all this snow, with the sun not there, with the cold and dreariness, this place doesn’t look like my America, doesn’t even look real....The sky, for example has stayed white all this time I have been here, which tells you that something is not right. — P. 152

Darling is as critical and insightful at home in Zimbabwe as she is when she emigrates to America to live with her weight-obsessed Aunt Fostalina who is struggling to fit into American ideals of looks, accent, wealth. Because she lacks the right paperwork, Fostalina cannot return home, even to visit. And so, of course, neither can Darling. Over the years, both generations of women struggle without American citizenship. By moving away from their home country, they are unmoored. We Need New Names shows us what people give up when they emigrate, and the fragility of what they gain.

A criticism of this book is sometimes that Bulawayo has overburdened it with social issues, but I appreciate that this is the reality of displacement. There is no single burden that accompanies it, but rather, an onslaught. Though this book was written in 2013, it is still a common story.

We Need New Names came out to acclaim and a lot of awards, some of the big ones. All entirely deserved, in my opinion. NoViolet Bulawayo is a stunning writer. I can’t wait to see what she publishes next.

Because we were not in our own country, we could not use our own languages, and so when we spoke our voices came out bruised. When we talked, our tongues thrashed madly in our mouths, staggered like drunken men. Because we were not using our languages we said things we did not mean; what we really wanted to say remained folded inside, trapped. In America we did not always have the words. It was only when we were by ourselves that we spoke in our real voices. When we were alone we summoned the horses of our languages and mounted their backs and galloped past skyscrapers. Always, we were reluctant to come back down.  — P. 242

Kirti Bhadresa is a settler living in Calgary/ Moh’kinsstis on Treaty 7 territory. She has been recently published in the Quarantine Review, Short Edition’s 300+ short story dispensers, and Thin Air Magazine. In 2021, Kirti graduated from Own Voices Alberta, a mentorship program for emerging writers. Kirti's story "Daksha Takes the Cake" is featured in the new BIPOC Solidarities issue of The Fiddlehead. www.beingkirti.com