At least you’ll leave a shoe print . . . A Review by Susan Haley of Sam Cheuk's Postscripts from a City Burning 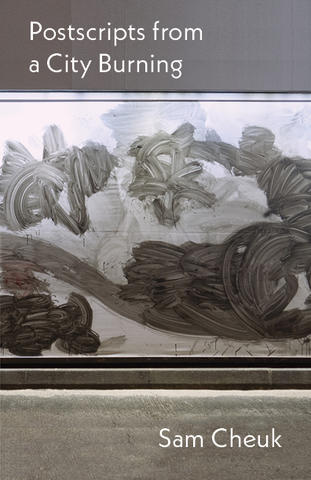 Poetry written on the brink of revolution, the poetry of protest, is poetry at its most urgent. To quote Czeslaw Milosz:

What is poetry that does not save
Nations or people?
A connivance with official lies
A song of drunkards whose throats will be cut in a moment.

Sam Cheuk’s Postscripts from a City Burning comes out of the Hong Kong protests of 2019, the student rising, and the whole city eventually engulfed in conflict, over a new law that would have allowed extradition of political prisoners to China ultimately, the very same people who rose to protest. Like the earlier “Umbrella Revolution” of 2014, over the erosion of democracy and the rule of law in the once British-controlled city, the protest simmered down after concessions were won and the extradition law was withdrawn.

However, it was a very tense situation: the graduation ceremony at the university with the sign, “You can’t kill us all.” And in this little book, much of that is brought home to the reader not only in words, but also by the intense black and white photographs, many of them simply of piles of hoarded stones on the pavement, the grim buildings and alleyways down which engagement with the police is going to take place, has taken place. Is that a condom lying there in the stony street? (I never thought I would find the sight of a discarded condom so touching, even tender!)

And there is a photograph, also touching because of the book’s epigraph, of the little tear-gas canister:

I’ve been scribbling for poems, plucked off the streets last night a used gas canister I use as a paper weight for luck, size of a cicada’s shell. What’s left inside don’t smell so bad but I won’t tempt the gods, ma.

Many of the poems seem to be letters, addressed explicitly to an unnamed “you,” a woman, his lover or perhaps his wife, who is also actually there with him. I sometimes find sex in poetry uncomfortable, because it crosses an aesthetic border from poetry into fiction, and not very good fiction either, but some of these poems are lovely. The echo of Plato’s Diotima in this one: “It’s as tho we were separated / at birth, our backs touching . . .” which returns hauntingly to the political present at the end:

. . . Love me then, you ask,
Thru the only way I can love you
In this minute of desperation,
Let’s find a way out thru our skin
As if there can be a way out.

And in this one, which is even more poignant:

What I want to record most
Is the simplicity of love I see
Floating about the streets,
People accidentally finding it,
Just in time, right there,
Maybe before being erased too.

But the overarching theme of this collection is what perplexes all of us, namely, What would I do? When faced with the truncheons of the police, the tear gas, the interrogation cells, the potential for deportation and imprisonment — for extradition! Would I stay? We ask ourselves. Would I fight? We are asking ourselves these questions at this very moment, looking at the trail of terror Russia is creating in Ukraine.

Feel that spot, the soft cartilage
At the beginning of the sternum
Where the rib cage splits?

These poems give an honest voice to the fear: I wouldn’t — I couldn’t! “To give up a story, / I haven’t the bravery.” But it seems he does have the bravery. “They haven’t tried me yet, / I am still good.” And, “Where you stand, winning / or not, at least you’ll leave a shoe print.”

Perhaps what is required is to have a stake, a foothold in the landscape. You don’t go into a thing like this, especially against overwhelming odds, in Hong Kong — or Palestine, or Syria, or in Ukraine, without

. . . a high rise . . .
And behind that, I don’t know if
you can see in the photo,
a mountain. Behind that, another
obscured from view, the story
of my genesis, a little foothill village . . .

There’s also the myth of the archer, which enters in the middle of a poem, tangentially, and is told without poetic form. This archer shot down nine suns leaving only the one we have left. He was rewarded by being given an elixir of immortality which he absent-mindedly left with his wife. In a moment of panic, she drank it herself, and went to live on the moon, eternally grieving for her husband, who of course, being mortal, had to die.

Then the author suddenly and acutely brings this to bear on the situation:

That is to say, I’m not a hero,
you are not a goddess,
neither of us will live forever.

This moon will keep hanging in
the night, beyond the future
stories others will invent.

That is not to say we never existed
A single story, among many
That happened in our small epoch.

The background here is clearly Chinese, as the author also makes clear in his poem which ironically portrays the dilemma of Carrie Lam, the erstwhile Chief Executive of Hong Kong.

I’ve never given so much thought
To anyone who stands before
a podium, prim and proper.
What may not be apparent
Is that we too have given all we can,
So what’s left? Choices
That cannot be choices . . .

Every situation where these choices arise is unique and the reasons the choices are presented is a combination of geography and history, and the answer the individuals give, in making the choices, relates to ethnicity and mythology — and also to that little village which is back there behind the mountain, which is almost obscured in the photograph by the high rise . . .

I thought this was a wonderful book, the poetry giving rise to profound thought. To end with a quotation from another poet whose existential choices still reverberate for us, Osip Mandelstam: “Only in Russia is poetry respected. Is there anywhere else where poetry is so common an excuse for murder?”

— Susan Haley
is working on a never-ending biographical essay.