Little Disrupters: A Review by Clarissa Hurley of Heather Jessup's "This is Not a Hoax" 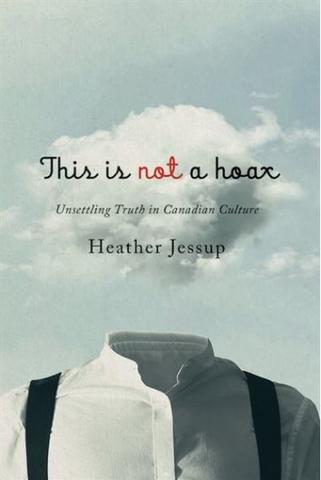 In the early 1920s a Russian émigré artist, Pavel Jerdanowitch, caused a stir in the American art world when he founded the movement Disumbrationism. His paintings, exotic post-Impressionist pieces riffing on the style of Gauguin and Cézanne, were widely praised by leading art critics. He enjoyed an enthusiastic following for three years until he confessed the catch: he was not Jerdanowitch, but Paul Jordan-Smith, a Los Angeles-based academic disenchanted with both the aesthetics of modern art and the discourse of art criticism which he felt had fallen into absurd, pretentious psycho-babble. The immediate catalyst to his fraud was apparently his resentment at the cool critical reception his wife’s realist paintings had received. His alter ego’s paintings were designed to spoof the gatekeepers of the contemporary art world.

His was just one of many notable art hoaxes of recent times; art has, after all, an inherent taste for trickery and disguise. Any work of art is, arguably, inherently artificial if its purpose is to re-present reality in a fresh or altered form, to defamiliarize or verfremden, as Brecht might have put it.

Critical enquiry into the subject of illusion and delusion in art is rooted in antiquity and crosses disciplines, ranging from Plato’s Symposium to Freud’s psychological theories about the role of the joke or trick in human interaction. English professor and novelist Heather Jessup enters the fray with her new book, This is Not A Hoax, a study of recent hoaxes in Canadian conceptual, visual, and literary arts. Her study focuses on more complex and politically charged forms of trickery than that of Paul Jordan-Smith / Pavel Jerdanowitch. Having evolved from her graduate research at the University of Toronto, the book is extensively researched and annotated, complete with vivid photographs to illuminate her case studies. Jessup’s primary goal is the re-examination of our cultural institutions and the dominant narratives they reinforce, subtly or intentionally. Her concern is what we have been told about ourselves as a culture through our art, how that art is shown to us, and who curates it. She chooses case examples that implicitly question the conventional authority we have invested in art museums, galleries, and publishers. Hoaxes, she argues, can function as “little disruptors . . . capable of revealing hardened habits that have come to be considered truths,” and further, they can “productively challenge and trouble our assumptions and the trust we place in official loci of artistic presentation.” Such hoaxes are the cracks that let the light in; they ask us to “re-see,” to reinterpret and consider the possibility of change.

Transgressive and rebellious by nature, hoaxes resist categorization. Jessup, in turn, resists a taxonomic methodology, adopting instead a primarily “accretive” approach based in detailed descriptions of her primary material. Her first example, Iris Haussler’s He Named Her Amber, is a complex example of in-situ “haptic conceptual art.” In 2008, Art Gallery of Ontario visitors were invited to tour the site of an archeological excavation in the basement of The Grange, a manor house built in the early nineteenth century by the prominent Boulton family on what is now the grounds of the gallery. Viewers believed they were sharing in the rediscovery of the life of an Irish maid, Mary Amber O’Shea, following the unearthing of her handcrafted wax artifacts. Only after viewing the site were audience members informed the elaborate excavation, as well as the character of O’Shea, were the creations of Iris Haussler, one of several leading artists commissioned by the AGO to create work to mark the reopening of the gallery following the Frank Gehry transformation. Haussler’s installation tampered with the presumption of the authority of the museum to lead and educate the public. Jessup concludes, “The artistic, theatrical, and narrative components to He Named Her Amber, which are then cleverly combined with facts of the Grange’s history, evoke questions in participants about how history is made, whose stories are told, and whether a holistic physical, emotional, and intellectual connection to the past is possible, and, if it is possible, which aspects of our connection to history may be real and which are imagined.” Jessup acknowledges the irony here that the AGO was in fact the presenter of the hoax but maintains (perhaps somewhat graspingly) that the viewer still exerts some control over the response to the work.

The next section of Jessup’s book examines the work of three artists who create “reverse ethnographies,” decolonizing techniques that disrupt the mythologies of the “peaceful settler” and “vanishing Indian”: Brian Jungen’s Sketches Solicited for Wall Drawings, Jeff Wall’s deceptively documentarian photographs of Fieldwork, and Rebecca Belmore’s performances pieces, Wild and Vigil. All of these works re-interrogate Canada’s colonial past by placing indigenous subjects at the centre of their own representation. Of interest to readers of literature will be the final section of Jessup’s study, in which she analyses the work of Canadian poets David Solway and Erin Moure, whose heteronymic writings challenge our notions of authority and truth in literature. A heteronym is an extension of pseudonym in which the author imagines a character complete with backstory and bio, often sharply contrasting with the author’s real identity. This performance of literary ventriloquism is an extension of what any writer does in creating the voice of a character, but these writers havemore pointed political goals. Jessup explains, “When an author is a heteronym, the role of authorship becomes part of the work of art and thereby an object to be read.” Destabilizing the notion of the authority of the book, “These heteronyms are able to confront habituated perceptions of authorship, language, and literature through, quite simply, make-believe. These real and imagined authors engage in cultural and ethical questions of what could be in Canadian literature. They ask readers to wonder why more imaginative and inclusive Canadian authorial and translational cultural practices do not yet exist. It is through an ethics of imagination that these heteronyms do important work in reimagining what Canadian culture and literature have the potential to include and to be.”

This is Not A Hoax is an engaging, informative read. Jessup’s enthusiasm for her subject and faith in the capacity of the art hoax for transformative social change is palpably sincere as she teases out with patience the myriad philosophical tangents the complex topic raises. At times the subject feels thornily overwhelming, as hoaxes are endlessly contingent on factors beyond the control of both the perpetrator and the participant. Fundamentally performative, hoaxes require the participation of the viewer, audience, or reader, and paradoxically may be particularly dependent on careful curating for their effects to “land” successfully. Jessup’s central point here seems an extension of the notion of castigat ridendo mores, that we can correct human behaviour through laughter or jokes. It may be a desirable outcome, but when these “little disruptors” are too little, might they not serve as the Lenten carnival did at one time for the ruling class and church? A controlled licence to temporary transgression which ultimately reinstates the status quo? Hoaxes may be socially conservative in intention and effect as much as progressive. Moreover, in the current online world with its multiple viewing platforms, one wonders how much reverence the public still feels toward major art museums or book publishers. When an uber trickster like Banksy becomes, arguably, a commodified brand – the Maserati of the art world – wherein lies the power of the hoax? Still, Jessup’s point is convincing; hoaxes can give pause to our instinctive positivism and make us productively suspicious of seeking truth or authority in art.

— Clarissa Hurley
is fiction co-editor of The Fiddlehead.