Lo Que Sera, Ya Pasó: A Review by Richard Cumyn of Sarah Xerar Murphy's "Itzel I: A Tlatelolco Awakening" and "Itzel II: A Three Knives Tale" 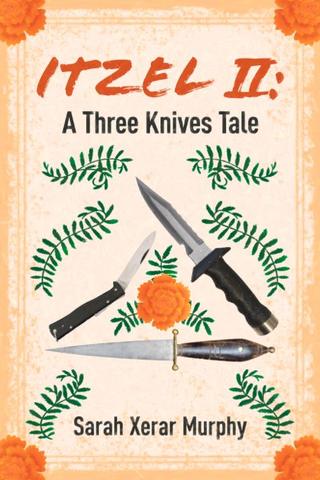 On October 2, 1968, soldiers in Mexico City fired live bullets at unarmed civilians who were protesting the summer Olympic Games, which would open there ten days later. Officially 44 people were killed, although the generally accepted death count is between 300 and 400, with more than a thousand injured. The event was the culmination in that country of a year of political activism aimed at ending war, improving worker safety, eliminating poverty and rooting out corruption in government. Students, some of them young Americans like Sarah Xerar Murphy, led the movement for social change by reaching out to labourers and the urban poor, forging democratic alliances, and exposing illegal practices in government, policing and the military. Initially, Mexican authorities said that their troops had been shot at first by protesters, 10,000 university and high-school students gathered in the Plaza de las Tres Culturas to hear anti-government speeches. An investigation determined that secret-service snipers had fired their rifles from rooftops towards the troops, igniting the massacre that would be named for the nearby church of Santiago de Tlatelolco.

According to the head of Mexico’s Federal Directorate of Security, 1,345 people were arrested that day. By June 10, 1971, the day of what has come to been known as the Corpus Christi Massacre or El Halconazo (Hawk Strike), many of those detained or exiled after the Tlatelolco killings were back on the street demanding justice and reform. The violence of that day, eerily similar to the 1968 event, led to the death of 120 protesters including a fourteen-year-old boy. Alfonso Cuarón dramatized the 1971 massacre with haunting beauty in his Oscar winning 2018 film, Roma. Against the emotional backdrop of these two horrific occurrences, Sarah X. Murphy has achieved an artistically ambitious work of prose, the first volume of which garnered her the Mrs. Dunster’s Award for Fiction at the New Brunswick Book Awards.

If one could distill Itzel I and II to its essential core — a difficult operation to perform on a story that is a blend of fiction and autobiography, linguistic and historical analysis, feminist and indigenous people’s critiques of patrimony and colonialism — it would be to call it a love triangle. Nauta O’Brien, the narrator, a self-labelled Brooklyn tomboy with a penchant for knives, has come to Mexico from the University of Chicago, where she was a National Merit Scholar. While there she was also a member of Students for a Democratic Society (SDS), which led the fight against U.S. involvement in Viet Nam and from which spun off the violent Weather Underground. Nauta meets a woman she calls Itzel, an Auschwitz survivor twenty years her senior, in art class at an American university near Toluca, capital of Mexico’s Central State. An odd name to give a blond Hungarian Jew, Itzel was the Mayan goddess of medicine and midwifery. The significance of the moniker becomes clear once we learn about Itzel’s heroic act, carried out on the day of the Tlatelolco massacre.

Completing the triangle is Sebastian, nicknamed Basta, an economics student Nauta falls in love with at the pensión where she is rooming, a house owned by a family named Oronsky. No longer living there, Basta returns often to chat with the maids. The Spanish word for enough, Basta regularly challenges the status quo, at one point early in Book I suggesting that the violence implicit in giving a child a toy gun is nothing compared to the violence of paying someone four hundred pesos a month — about thirty-two dollars. Basta is someone who is “putting things together over and over, seeing how things fit,” whether it be the uneasy relationship of a “squeezed,” frightened, rule-bound middle class and its servants or the way the government pays lip service to democracy while trampling the rights and wasting the very lives of its citizens.

While Nauta and Basta are attending a conference at Columbia University, they hear about the Tlatelolco massacre from Itzel, who does so by evoking Picasso’s iconic mural, Guernica, depicting the 1937 bombing of the Basque town of that name by German and Italian warplanes in Fascist support of Franco’s Nationalists during the Spanish Civil War. A similar number of innocents, mostly women and children, were killed then as died during El Halconazo in 1971.

To illustrate the point that trauma continues long after the damaging instance and is in fact endlessly looming on a victim’s horizon, Sarah X. Murphy has written Itzel I and II in the future subjunctive, a mood rarely used now in Spanish, a language in which the author is fluent. The effect, at least at first, is hopeful: perhaps if atrocity is treated as possibility rather than certainty, it can be averted. A spacey open-endedness characterizes the prose. Sentences flow for many lines at a time, dreamlike, erudite, replete with fact, translation, word play, analysis and digression, making it feel as though we are listening to a drowsy professor talking to keep herself awake. Murphy affords her reader no white space, few psychic rest areas on the page, in either volume. Hers is an intelligence that expects us not merely to keep pace but to dive into the telling, accepting the fulsomeness of expression as well as the circularity of it. Over the course of more than 600 pages, however, Murphy’s stylistic choices — the future tense, the beautifully balanced complex sentences, the use of “so that” to suggest segues that often aren’t there between thoughts — make for a static formality.

Relatively little happens to our trio — friends, lovers, revolutionary comrades — but we return to the seminal events of their relationship many times, like survivors who can’t break from memory’s death-grip. While a brilliant way of approximating post-traumatic distress, revealing history indeed to be the nightmare from which we can’t awake, this mode of storytelling sacrifices dramatic immediacy to the erection of a monumental, at times teetering, edifice of inquiry and implication. What is the effect on the narrative of this continual sifting, questioning and analyzing? The irony is that the future subjunctive, employed as it is here, throws Nauta’s story back hard onto the unalterable past.

Perhaps this was Murphy’s modus operandi all along.