Magic Beneath the Waves 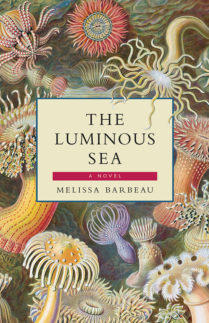 A review of Melissa Barbeau's The Luminous Sea (Breakwater Books, 2018)

The Luminous Sea by Melissa Barbeau softly melds the quiet thrill of scientific discovery while questioning its moral integrity. A stunning debut, the Newfoundland author captures the essence of the Canadian Maritimes with a novel that is smart, thoughtful, and inventive. Vivienne, a young and under-appreciated research assistant, makes a remarkable discovery in Damson Bay while on the water. After a summer filled with endless weighing, measuring, and cataloguing jellyfish and other various sea creatures, Vivienne reels in a surprise catch and her tidy, scientific world is changed forever.

Vivienne has taken a position as a researcher in a remote bay on the coast of Newfoundland and spends her days on the water sampling marine life and her evenings inputting data; there has been an increase in phosphorescence and she and her team are studying this scientific curiosity. She took this position because she needed a job, a place to stay, and she needed to escape her former life, if only for a summer, in order to regroup after a breakup. The story begins and ends on the sea; Barbeau’s prose captures the movement of the tides on the surface of the Atlantic, matching Vivienne’s ruminations. “Vivienne turns the wooden spindle of the jigger in lazy circles. The bottom feels a long way down, the boat has drifted off the marks while she gazed up foolish at the moon. She pulls at the fishing line, a slow steady back and forth. Tedium and meditation” (10). But rather than tedious, the novel baits you, pulling you through the water, cutting a “slow swath through a cloud of phosphorescence” (7).

When the blurb on the French flap of a modern novel promises “magic realism” and mythical creatures rising from the depths of the ocean, the reader would assume they are about to read a horror or science fiction novel that is laden with genre tropes and foreign monsters that will inevitably cause the destruction of life as we know it. Melissa Barbeau carefully balances science and fiction in her novel, and avoids the monstrous entirely. Vivienne describes reeling in the creature:

A shape emerges, it looms into focus as it nears the surface of the water, and the sight of it makes Vivienne’s breath catch in her throat like a barb and there is an instant where the line snags against the oarlock and she thinks she will lose her grip but she gives a final heave and pulls her catch up and over the side and right into the plastic fish box in the bottom of the boat (11).

The above sentence, long and breathless, uses tempo to increase the tension as Vivienne describes what she has pulled in: “The creature is longer than the fish box, and lean, her flukes, draping over the edge, seaweed dripping from her shoulders” (11). There is a deliberate gendering of the fish and the description of the creature is only ever in referential terms and pieces: she has a face with gills, flukes, shoulders, kelp arms and a powerful fish-like tail. The mysterious creature is only ever described as a “fish” or a “creature,” never a monster or a mermaid. The creature is a scientific marvel that will bolster Colleen and Vivienne’s careers.

One of the more interesting things about this novel is how Barbeau critiques the post-graduate experience to reveal abuses in power, ethics, and intellectual property without being overly didactic. Vivienne’s research supervisor Colleen is a harsh and driven academic who, when shown the creature for the first time, immediately takes control of the “project,” limiting Vivienne’s involvement and belittling her at every opportunity. Colleen is a believably mean person who is unconcerned with other people’s feelings. It would have been easy for the antagonist in this novel to be one-dimensional; instead, Colleen is treated fairly by the author, and although not many readers will personally identify with her motives, they will, at the very least, understand them. Barbeau uses Colleen as a contrast to, and a foreshadowing of, Vivienne’s future if she chooses to return to her old life.

When Colleen invites her supervisor, Dr. John Isaiah, to the bay to lead the research on the creature, it completes the academic triumvirate: naïve beginner, crass career woman, and bitter old man who never succeeded enough in his career. No exploration of academia would be complete without the abusive professor who uses his authority to threaten, coerce, and bully his employees to advance his career. Dr. Isaiah is horrifying:

His bottom teeth are narrow and yellow, crowded into his jaw. His breath stale. “Careers are made over drinks, did you know that? Fellowships are decided over wings and a pitcher of crappy beer. And do you want to know something? I am never invited. I am not ever invited.” He lets go of Vivienne’s hands and grabs her between her legs, and his hand is as hot and hard as an iron (112).

This intense scene is as disturbing as it is perfectly narrated; the language is direct and shameless, not allowing the reader to skim past without reading every word. A supporting cast of locals round out the story of Vivienne’s redemption, her coming-into-herself rather than a coming-of-age.

The Luminous Sea is delightful, melding realism and the mysterious question of what lies beneath the waves into a brilliant and readable novel. Barbeau’s characters are rich and complex, finding their way through their inner turmoil and tragedies to, ultimately, come together as a community. Like the creature, the reader finds themselves trapped in the tumultuous waters of the book, moving unceasingly towards the rocky cliffs of Newfoundland, racing towards the sea, BASE jumping into the unknown.