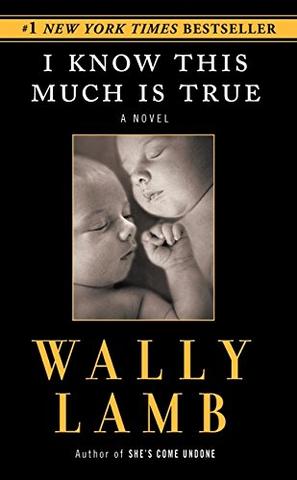 I Know This Much Is True by Wally Lamb

I don’t know how I missed Wally Lamb all these years. It wasn’t until I saw the recent movie, “This Much I Know For Sure”, where Mark Ruffalo gives a spectacular performance playing both of the twin brothers in the book, one schizophrenic, that I sought out the novel it was based on, to see if the movie was true to the source. The book is a door-stopper at nine hundred plus pages and I intended just to flip through it but once I started I was completely hooked. To sustain a compelling first person voice over such a distance is no easy feat but I could have stayed with Dominick Birdsey and his sardonic sense of humour, his faltering self-awareness, for far longer. The writing taught me a lot about the intrinsic draw of a character with such a complex range of feelings and motivations: the love and hate he feels for his brother, the life-long protectiveness, the guilt and resentment. As a therapist, I especially enjoyed his sessions with Dr. Patel, an Indian woman psychiatrist, who gradually, with tenderness and precision, brings him to accept his own mixed feelings, and take his life back. I thought  I might skip the novel within the novel—Dominick’s grandfather’s story of his self-described “heroic journey”, but it was equaling fascinating, written by a man full of self-deception and destructive impulses as his grandson, reading it, is struggling to choose a different way. It’s such a treat to encounter a prolific writer whose prose pulls you effortlessly through a humane and remarkable story.

Melinda Burns is a writer and a psychotherapist in Guelph, Ontario. She is the daughter of a Mohawk mother and an English father. Her fiction won first prize in the 2001 Toronto Star Short Story contest. She has published writing in Canadian Notes & Queries, The New Quarterly, and Grain. Her creative nonfiction piece "Deathly Afraid" appeared in the BIPOC Solidarities issue of The Fiddlehead. Order your copy today!