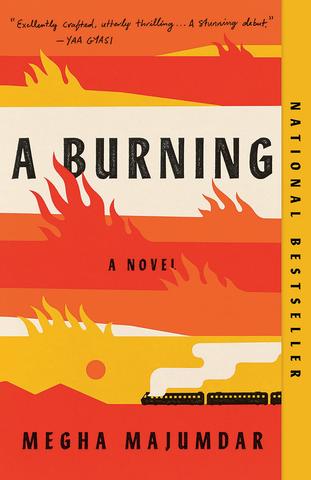 I grew up in a Hindu household, lived in a Jewish neighbourhood, and attended a Catholic school, culminating in a frankly obsessive fascination with belonging and cultural identity. It’s brought me to the pages of The Namesake, The Vanishing Half, Five Little Indians, and to a book that feels especially relevant right now - Megha Majumdar’s debut novel, A Burning.

The story follows three characters in the wake of a terrorist act in Kolkata, India. Written through three distinct viewpoints, Majumdar brilliantly captures each individual’s ambitions and the obstacles they face, often dictated by the circumstances of their birth – whether caste, religion, or gender. One of the most animated voices belongs to Lovely, a hijra and aspiring actress, who speaks in the unusual present progressive. It gives these chapters a feeling of immediacy, which, coupled with Majumdar’s economical phrasing, lends an urgency to the story that propels the reader to its conclusion.

A Burning explores themes of injustice and intolerance against the backdrop of modern-day India, at a time when nationalism is slowly eroding its secular traditions. But while grounded within a specific country’s political and ideological framework, there is a universality to Majumdar’s writing. With her portrayal of class and corruption, I couldn’t help but draw parallels to Canada’s current landscape - our own reckoning with government sponsored discrimination and the struggles of marginalized communities in this country.

A Burning is a beautiful, if heartbreaking read that reminds me yet again of the vulnerability of our collective values in the face of greed, and how fragile our sense of belonging can be.

Monica Nathan is a Pushcart-nominated writer whose work has appeared in Barren Magazine, Kros Magazine, and The Feathertale Review. She is a Contributing Editor at Barren Magazine, and spends her time working on a collection of short stories and writing articles in marketing and tech. She lives in Toronto and calls her husband and two kids home. Monica's creative nonfiction essay "Things I Won’t Be Remembered For" is featured in the new BIPOC Solidarities issue of The Fiddlehead.