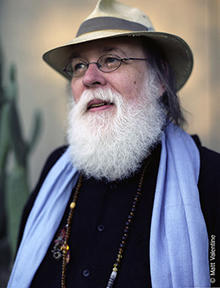 No poet I can think of writes as much about dreams as Dubie, and no poet ought to be able to, as dreams are so often adduced as the moment of epiphany, as the encoded truth that underlies all the banality that consumes our daily lives. In Dubie’s work, however, dreams seem as one room in the mind’s library, in which there is also an astonishing array of books and the lives of their authors, and details of plot and character that are not there, but could be. There are landscapes both from memory and from imagination, scenes of history in the grotesquerie of its filth and muck, and assorted friends and family who demand attention, or simply stop by for a chat.

So dreams are merely a part of poetry’s phantasmagoria. In “Deuteronomy”

Uncle Joseph’s coat has many colors.
Two knuckles of a brass hinge. Joe

Strummer died opening a door. Mourned
in the captivity of wheelbarrows.
Our new war now dedicated to the mining
of lithium on a narrow road
north of the Khyber.

This passage alone astonishes with its play of associations, which cannot be resolved, or at least for this reader they cannot. Is the captivity of wheelbarrows the grave itself, piled with the dirt carried there? So much depends on a brass hinge, with the violence of its brass knuckles. Is “Uncle Joseph” Stalin? Of course, the Joseph of many colours is from Genesis, interpreter of dreams, of years fat and lean. Is there a reference to the failure of Stalin’s collectivist farms? And is Joe Strummer opening a door to the underworld: “London calling to the underworld” and “the zombies of death.” In this apocalyptic song “the wheat is growin’ thin.” Will Dubie’s US reap what it sows in Afghanistan, mining lithium for endless batteries powering throwaway commodities? Is the wheelbarrow red?

I do know that Dubie’s poetry can be replete with simple tenderness, as in “Lines for Little Mila.” Here the speaker presents a few domestic memories of Grandmother, and, now older, tells “a friend’s little girl / about some of this, / and she immediately / slumbered, putting / a blue ghost inside my chest.” In “Homage to Sesshu” comes a flurry of metaphors: “The ink of two roofs / are the lifting wings / of three crows eating / from the burst sack / of rice and tiger worms.” This resolves into the concluding line “The snow is snow.” Can the emotion of imagination be more simply wrought? These flourishings of ink are the many things I want them to be. But only if snow is snow.

It is a pleasure to present five new poems, along with this retrospective of Norman Dubie’s career. Is there something new in these poems? Certainly, for as he says, “I was for the first time in years / forming a new theory about human misunderstandings” (“Vladimir N.’s Bestiary of Flashy Fiction”). One might say that Dubie has an encyclopedic mind, but I prefer to think of these poems as coming from a card catalogue, pulling the long drawer to be fascinated by what is typed on index cards. In a dream I go with Norman to the shimmering lakes over the salt flats in Bolivia. Or are they in Peru?

Permalink Submitted by Lois Yerxa (not verified) on Tue, 05/16/2017 - 11:10
I like this. I am a wee poet from humble beginnings..mainly self taught but knew two great poets..Alden Nowlen and Fred Cogswell. Fred, I learned from more on forms of poetry. I LUV to write verse.