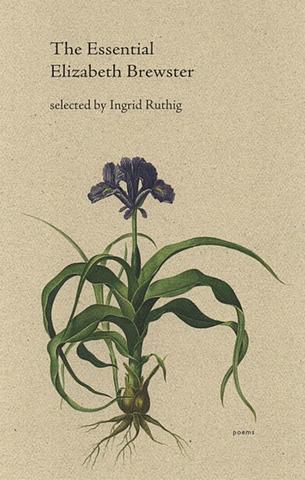 In The Essential Elizabeth Brewster, Ingrid Ruthig selects poems from Brewster’s twenty-two poetry books and presents them in sections named after the book titles and in order of their publication. Poems written earlier but published in a later collection are asterisked in the table of contents, for instance “Where I Came From” written in the 1950s seems to fit thematically with the first collection, East Coast (1951) and doesn’t appear until the section named after 1977’s Sometimes I Think of Moving. Ruthig does much to inform the reader and to do justice to Brewster’s legacy in the thoughtful introduction ending with a complaint that Northrop Frye, who included Brewster’s work in Letters in Canada, chose to leave it out of The Bush Garden (10). The biography (“About Elizabeth Brewster,” 59-61) and a bibliography of Brewster’s writings together with critical works about her poetry is a useful addition (62-63).

The title poem “East Coast” from the first section (“East Coast — Canada”) provides a strong beginning to Ruthig’s selection, both in placing the poet and her poetry on a landscape and in introducing a theme that will prove central to Brewster’s work.

Space surrounds us, flows around us, drowns us.
Even when we meet each other, space flows between.
Our eyes glaze with distance. (11)

In describing the immense size of the country and distances between cities, the speaker uses natural imagery to create an “objective correlative” for the poet’s personal isolation and her feeling of apartness. I do not think Elizabeth would mind the reference to T.S Eliot, a popular poet-critic during her day and considered a spokesman for modernism and a tradition that is seen as continuous with present writing whether building on or departing from that past.

Again, in “Afternoon Snow” from the second section Passage of Summer (1969), a theme of loneliness recurs but with more complex psychological undercurrents. As snow continues to fall, the speaker wants to sequester herself and shuts herself indoors, but the counter-suggestion that she, at the same time desires company, enters the verses that follow, “my eyes giddy from watching the window” :

I want you to come, and am afraid you may.
You might walk past, in the soft dark street,
And I may never know. (16)

Against the tableau of the implied window, a contradiction in the poet’s feelings is thus internally dramatized. Similarly, tension between wanting and not wanting is dramatized in the poem “November Sunday,” where the introspective speaker, with characteristic skepticism and self-honesty queries herself about the basis of her desire:

I wonder again, as always,
if I truly love you
or if only my breasts love you
wanting your hand. (17)

The speaker confesses “I admit I do not understand” the “you” addressed in the poem, and suspects that her potential lover would not understand her either: “My mind has caves/secret and deep/ and darkly shaded.” Here the mythic image of the prince who falls in love with a mermaid to force her onto conspicuous land and away from the sea caves where she in her introspection preferred to dwell becomes implicit.

In “Inheritance” from the fourth section Sunrise North (1972) details from the poet’s early experiences and family surface, and among them her conflicted feelings about her father emerge. She begins “he was a good man,” and a “gentle man” (as opposed to a gentleman) but she was “ashamed of him, a little”

because he never won in life,
also because he tried to comfort himself
by pretending to despise those who prospered. (20)

Nevertheless, the speaker with trademark honesty in her self-examination confesses, “I could never cut him out of myself,” “arrogant and timid,” and, rather drolly, adds, “I find that I also repeat the same jokes” (21). The poet-speaker cannot eradicate the root from which she, herself, has sprung.

When I received a copy of The Essential Elizabeth Brewster, I was delighted with the cover design that shuns shininess using a parchment finish and the wrinkled floral image of an iris drawn from a stipple engraving by Pierre-Joseph Redouté. After reading “Blue Flag” (19) from Sunrise North, I decided this poem must be considered the one that inspired Ruthig’s choice for the cover design. Both as a spring flower, difficult to approach inside marshes, but complex and striking in its orchid-like shape, the iris epitomizes a theme of desire for the forbidden that truth may be considered while it comes at a cost and tempts all who reach for truth (not least poets). Here the speaker’s mother warns her daughter not to pick the flower in the middle of the pond, and attempts to scare her by telling her it is “poisonous (19).” The child, however, precocious in her willfulness, is wise to the ploy, noting the midges are not poisoned by the flower, and so she decides that she must have this “beautiful flower” and a “different kind of life from mine.”

Brewster has a way of engaging the reader’s sympathy without sentimentality, as in “When I am Old” (The Way Home, 1982) she manages this through a playful self-satire. Here, while the speaker expresses a desire to do what she wants, to “let my hair go grey” and “eat as many meringues as I want” and states her determination to “walk with a cane heavily” (30), she also reflects a sense of her own failure. And at long last “I shall write/ the great poem I have not yet written,” she half mocks herself (31).

It will be enough to be,
to have been, to speak
to myself
and anyone else
who may overhear (Ibid.)

Some of the more striking poems include “Shock” (23), which expertly plays with a Medusa-like idea of petrification or fright that turns one to stone. Here, the perhaps real experience of assault or sexual assault (and there is a mention of such an incident in “About Elizabeth Brewster,” 60) is merged with the Keatsian suggestion of a Greek marble statue in which life is captured rather coldly in art. Similarly skillful, “Adjusting to Disaster” (37) uses surreal imagery as overstatement that is countered by understatement and humour to level the at-times irrational nature of anguish. Brewster’s simple style, homely images and her surprising depth and ability to connect almost matter-of-factly with the reader makes hers a legacy worth preserving.

As a former graduate student who studied under Dr. Brewster — I am delighted with the publication of this beautiful volume that does much to honour a poet, who, although twice having been nominated for the Governor General’s Award, is today often overlooked. In “About Elizabeth Brewster” I was pleased that P.K. Page’s key role in Brewster’s career was mentioned, but surprised that her close friendship with Anne Szumigalsky (with whom she regularly met for Saturday luncheons in Saskatoon) was not included. Of course, the biography is short with good reason since The Essential Elizabeth Brewster is intended to showcase the poems themselves. Although there are some poems I would have liked to see included in this collection — personal favourites “If I should meet myself,” or the darkly sensual “Riddle me, Sweet, how you who had . . . ” or the childlike and human “Monkey Face” — the latter a poem Elizabeth dictated to her friend poet Nancy Senior while recovering from the stroke that left her blind — any selection must make difficult decisions, and taste is inherently subjective. All considered, The Essential Elizabeth Brewster is a collection for which I will reserve a spot on my bookshelf, where I too have had to make difficult choices in the accumulation of poets and their works over the decades.

— gillian harding-russell
is a poet, editor, and reviewer.

Permalink Submitted by Susan McCaslin (not verified) on Thu, 10/27/2022 - 03:14
gillian harding-russell's fine review of Elizabeth Brewster's selected poems, edited by Ingrid Ruthig is clear, incisive, and demonstrates a depth of knowledge of Brewster's body of work. I too see Brewster as a poet whose legacy has been unduly neglected, as I interviewed Brewster in March of 1997 and included her work in my anthology A Matter of Spirit: Recovery of the Sacred in Contemporary Canadian Poetry (Ekstasis Editions, 1998).