The reality of wilderness: A Review by Warren Heiti of John Steffler's Forty-One Pages: On Poetry, Language and Wilderness 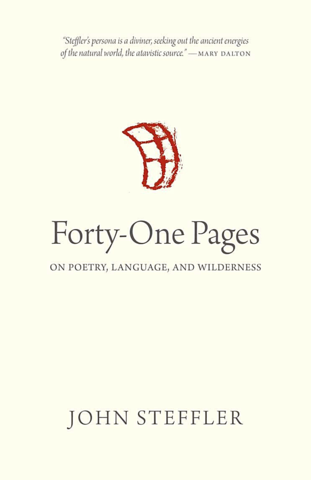 The reality of wilderness

Is wilderness real? — No one who has woken from a nap in the bush can doubt it. It was there while one slept; some version of it will be there after one dies. The passage you quote from Chekhov testifies to this truth: “‘The monotonous, dull noise of the sea, coming from below, spoke of the peace, the eternal sleep that awaits us. So it had sounded below when neither Yalta nor Oreanda were there, so it sounded now and would go on sounding with the same dull indifference when we are no longer here”’ (108-9). This constancy and indifference are characteristic features of wilderness. You find wilderness in Conrad’s sea, “the cosmic abyss” (66), and in the “infinite void” (55) of outer space witnessed by the NASA probe Cassini.

Is wilderness different from some forms of human culture? — No one who has emerged from the bush onto the side of the highway can deny it. On that threshold, the difference is starkly displayed. There is the roadkill that used to be an animal. It keeps trying to return to earth, but finds itself in the hell trench, condemned to be a fur rug for the climate burners. On the other side is the commune of trees, their patience and silence radical. (This is not to say that there is no violence or noise in the natural world. But it is the expression of life metabolizing life, not the cacophony of hairless apes transmogrifying organisms into matériel.)

Your book is what it says on the tin: forty-one “pages” on poetry, language, and wilderness. (A “page” you define as “a synecdoche or icon for all literature” [119], and in the book’s opening and closing images, you imagine it as a Heideggerian clearing in which wild things

might appear [4-5, 110].) I confess that I have always been allergic to this genre: writing about writing. It’s too “meta.” (Not unlike the genre of the book review.) So I owe you an apology: while I greatly admire The Grey Islands and Lookout, I’m not the ideal reviewer for this book. Why write about writing when there’s a real world and we have sense organs shaped to partake in it? When the crows are congregating on the bar stools of the neighbourhood’s big shaggy fir and the chokecherry is weary with holding all those thimbles of bitter red liqueur?

Your book hearkens to a tradition of nature writing that includes Bashō and Thoreau, among many others, some of whom you mention in passing (61-2). Several of your themes are familiar from more local poets. The settler’s insatiable longing for an autochthonous relation to the land is reminiscent of Tim Lilburn’s trilogy, beginning with Living In The World As If It Were Home, while the reflections on the limits of language and the nature of nature sometimes echo those of Jan Zwicky in Lyric Philosophy, “Lyric Realism,” “Wilderness and Agriculture,” and “What Is Ineffable?” Even the tiny blue dot seen by Cassini rhymes with the tiny blue dot seen by Voyager 1 in Sue Sinclair’s “Loving Pavlova.” But the closest precedent for your book is Don McKay’s Vis à Vis: Field Notes on Poetry & Wilderness, although the styles are very different: McKay’s book is less loquacious, more spritely and mischievous. Still, they think about the same mystery: how do poems mean? In particular, how do some poets get words — little bits of domesticated sound — to gesture at wordless aspects of wilderness? More on this question shortly.

While you claim that you’re not “an Idealist in the philosophical sense” (42), there is a tension in your book between a plain faith that wilderness is real and independent of human culture and language, and a fear that the human mind is confined in a linguistic and cultural cage — it can peer through the bars but can never be sure it isn’t seeing simulacra. The tension is introduced on the first page, but the source of the fear is not fully announced until the fifth, “Frame”:

once a language or communication system gets established and becomes a shaping principle for a group of individuals and their culture, it does start to inflect the way that group perceives the world. For a long time now in Western cultures, I think, people have lived primarily inside a linguistically mediated, even a linguistically constructed, world. (15)

I agree entirely that we settlers have good reason to be anxious about the way that our inheritance warps our perception of the world. We are the grandkids of Descartes and Bacon, who told us to use technology, both mental and material, to become “masters and possessors of nature.” If we look at the world through their goggles, we’re going to see trophy-ready robo-antelopes and exploitable “natural resources.”

But from the distorting effect of the goggles, it doesn’t follow that we can’t see clearly with our naked eyes. Just look out the window: the hummingbirds are so obviously having fun! Zipping up to the azure zenith and then bungee jumping into the green void. Whenever we experience this joy with our bodies, there is no room for any anxiety about the reality or knowability of the world. Would you agree? You do write of joy as “the energy inside being, the awareness of being” (100).

Back to that mystery I mentioned earlier. Human language — or English, at any rate — generally fails to do justice to wilderness. The reason seems to have something to do with structure (for this insight I defer to Zwicky): wilderness is a complex, resonantly integrated whole. English, by contrast, tends to be disintegrative: linear rather than resonant, and its nouns seem to single out individuals. How is it possible, then, that some particular uses of English fail less than others? In diction that echoes Zwicky’s, you write,

Words — even in contemporary English — can be used to speak of the world experienced as an integrated body, a wholeness, or perhaps as a current of energy inhabiting all phenomena simultaneously. Poetry often attempts to speak of or allude to aspects of              reality experienced in this way. The art or skill in speaking of the world as an integrated or trans-categorical whole seems to involve working against the atomizing, disintegrating tendency in many Indo-European languages. (16)

But how, exactly, does poetry do it? I’m not sure that the book answers this question, although some of its poems show the way.

Your book includes some fine ideas. I salute your defence of the truth of animism (36) and your defence of the truth of what has been misnamed the “pathetic fallacy” (98). Common to both is the intuition that we can and sometimes do communicate meaningfully with the more-than-human world (a chimpanzee, a cannonball tree, a dog, a rock, a river). And then there’s this idea: our minds are not confined to our brains. There is a collective unconscious that we visit while we sleep, like a reservoir from which we replenish ourselves. You write, “We do think with a mind beyond ourselves: a wild, aggregate mind” (93). I agree with the thought but not its formulation. The wild mind, while it is transpersonal, isn’t an aggregate. A car lot is an aggregate, or a bag of coins. These are artificial wholes, artificially formed by herding atoms into temporary proximity. By contrast, the wild mind, the collective unconscious, is a resonantly integrated complex, like a flourishing marsh or a Beethoven symphony.

Some of your writing about writing is genuinely instructive. For example, your re-reading of Atwood’s “Animals in that Country” (64-5) as well as your re-reading of Williams’s old red wheelbarrow. In the latter case, the insight is condensed in a metaphor: “The plain language heats up, however, because of two conflicting forces. The opening ‘so much depends / upon’ generates a forward momentum, a desire in the reader to find the answer and complete the proposition, but the structure of the poem then impedes the momentum, and the effect is something like electrical energy passing through a resistance coil and heating it up” (101-2). Mostly, the book’s prose is housebroken and well behaved, but the sporadic metaphor such as this one acts like a defibrillator: the body of the paragraph is jolted back to life.

What’s missing is Leopold’s encounter with the wolf, Kolbert’s with the  frog, McKay’s with the raven, Lilburn’s with the deer, Zwicky’s with the beavers. — Not entirely missing. But to find it, we need to appeal to the poems. As Stan Dragland says on the back cover, the “most exciting pages” of your book “are those on which that wild mind is loosed in poems alive with ‘animal energy.’” Two of the greatest pages are “Barrens Willow” and “Openings,” which bear witness to the epiphany of the willow and the epiphany of the snake.

. . . the same here-not-here
fulcrummed presence as the black and yellow
garter snake I found resting on the handsaw’s flat blade
last evening when I was gathering the tools. Maybe
enjoying the sun-heated metal. Its straight-mouthed
utterly unfake face. White plated lips and obsidian
bead eyes. So real it could not be distinguished
from other things. I slid the saw out slowly
from under the snake, leaving it taut and curled
on the straw bale. Cold living flame. It only
looked at me, flickering its tongue. I too was invisible. (90)