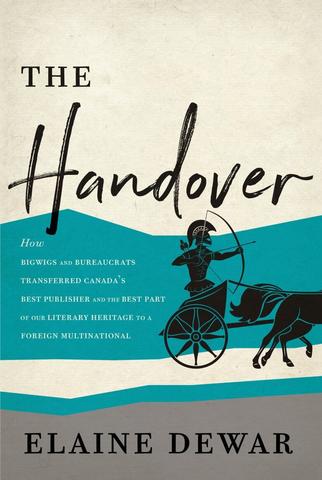 I highly recommend The Handover by Elaine Dewar (published by Biblioasis, 2017) for both writers and readers. Her book provides a captivating and enlightening view of the last twenty years in mainstream publishing in Canada. Her book is impeccably researched, and as such, the details she unearths can be disturbing as she seeks the truth. Like many writers, having arrived in the middle of this story, I valued learning how Canadian Literature came to be shaped the way it is and the how the marketplace and governments played a key part in that. In turns out that the formation of Canadian Literature has not always been noble or fair. I also learned reading this book a very important new/old word, monopsony. It means one buyer. According to Dewar, it is a word that best describes the publishing of Canadian fiction and nonfiction today. For example, Penguin Random House imprints used to compete for manuscripts (ie offer competing bids) but they no longer do so (hence one buyer).

At the time I was reading this book it was announced that both Bertelsmann and The News Group (HarperCollins) had expressed interest in purchasing Simon and Shuster. Such a purchase would further reduce publishing/reading options for writers and readers.

This book uncovers a number of secrets and scandals and at times it reads like a mystery as Elaine Dewar goes about researching exactly what happened when M&S was handed over to Random House and U of T in 2000. Penguin Random House now has 100% ownership of M&S and with the demise of publishers like Stoddart and Key Porter the market for fiction and nonfiction in Canada has been rationalized to a very small number of mainstream publishers. This book makes it very clear (with well researched facts and diligent interviews) how that happened and the dangers such a rationalization presents. Dewar makes it clear that this is not a warning about what will happen but rather the current state of affairs.

As I read her book it became very obvious to me the continued importance of small presses in Canada. They are most often the ones who survive and last. The failings of Canadian Literature (fiction and nonfiction) (ie lack of sales) has been falsely blamed on a small market but in truth it may be the failure to protect that market and to properly promote such writing which has caused this downward trend. Elaine Dewar doesn't hold back as she probes exactly what happened in 2000 when M&S was handed over to Random House and U of T.

Robert Hilles won the Governor General’s Award for Poetry for Cantos from A Small Room. His latest poetry book is Shimmer. His novel Don’t Hang Your Soul on That will be published in 2021.

Permalink Submitted by Darlene Quaife (not verified) on Fri, 06/04/2021 - 19:45
Thank you. Literature and the publishing industry in Canada is near and dear to my heart. But over the years I have been mystified by the process. The Dewar book is on my reading list.