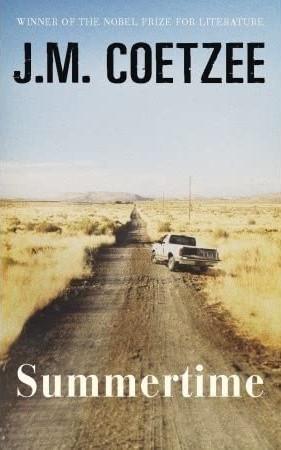 When Coetzee’s Summertime was shortlisted for a Booker prize (it would have been his third Booker) no one expected him to show up for the gala. Mark Brown, arts correspondent for The Guardian wrote;

J.M. Coetzee himself may or may not be all those things but the novel has been called fictionalized memoir. I read it as also being meta-fiction and recommend it to you on that basis. The story centers around a character named John Coetzee, a writer no less, who has died. Another writer, a young biographer, sets out to interview five people who knew him personally.

It begins with a short chapter of John’s notebooks and ends with “undated fragments” from those same notebooks.  In the latter he gives some interesting views on poetry and prose, among other things. But in the pages between we see our author’s brilliant portrayal of John’s life, his politics, his doubts, and as reported to the biographer, his relationships. To me the book had a sub-level of excitement in that the whole time I was immersed in the story, its characters and their motives, another part of my mind was thinking about the layered conceit being so well constructed. What a ferocious and freeing way to write.

I read the book when it first came out (2009), and the above passage has stayed with me.  And, at one point I recall having the feeling that J.M. was almost winking, (though that would seemingly be out of character) and saying, See, if this is what you think of me, and these are the types of things you’ve heard and read and believed about me, then this is all you will get. Nothing more.


Rose Maloukis is a poet and visual artist, with a BFA from Wayne State University, Detroit, Michigan. Her poetry was short-listed for the 2015 Montreal International Poetry Prize. She won 2nd place in Geist’s erasure poem competition. Her chapbook, Cloud Game with Plums was published in July 2020 by above/ground press. Her poem These Weeds was featured in issue 286 of The Fiddlehead.