Secret Signature: The Quiet Revolution of Berthe Morisot : A Review by Martha Shulman of Dede Crane's "One Madder Woman" 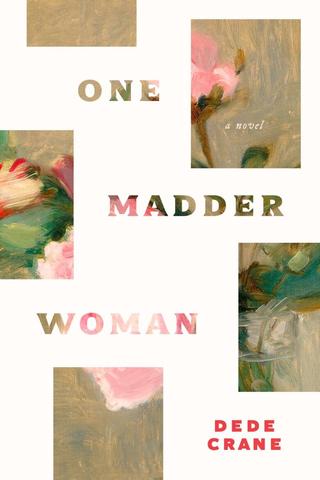 Dede Crane’s beautiful novel about impressionist Berthe Morisot essentially begins three times. There is the actual opening, a brief interlude in 1895, when we see Morisot tending to her daughter — whose last name is Manet. Then we revert to 1858 and the note her painting teacher sends her father, warning Monsieur Morisot that Berthe and her sister Edma’s talent risks ruining them for marriage and bourgeois life. And there is young Berthe, who still sees herself as an acolyte of her more talented older sister, realizing that she doesn’t just see colours — she feels them. Everything that will happen — Berthe’s growing estrangement from the patriarchal, stifling, and hypocritical world she was born into, her increasing commitment to painting, and her complicated relationship with fellow painter Édouard Manet and his family — is there, dabbed like a burst of colour on the page to await Crane’s slow, sure spreading into nuance and detail.

It’s hard, from this remove of time, to say who is the most famous Impressionist — but it is definitely not Morisot, the only woman in the French boys’ club. Crane makes the case for Manet as the most influential — societally and for his fellow painters. He peacocks into the book in gloves of a “surprising aubergine” and trousers the “tan of a deer’s spring coat,” the scandalous painter of scandalous works. Berthe and Edma have paintings accepted to the 1863 Salon — the first of the so-called Salon des Refusés, but they are patronized as talented young ladies, and, like everyone else, overshadowed by Manet’s Le Déjeuner sur l’herbe, which depicts a naked woman picnicking with fully clothed men. Crane moves beyond prurient horror and delight to depict Berthe’s encounter with the painting. Coupled with Edma’s connection of it to their father’s affairs, his infinite freedom compared to their circumscribed and chaperoned lives, it, Berthe thinks, “overstepped my knowledge of what a painting could do.”

While Edma is immediately drawn to Manet, Berthe prefers the painter to the man: he’s a teaser, a flirt, and he occupies too much of Edma’s mind, given that they’ve sworn to remain single. Plus, he’s married. But once he enters the book, he never leaves it: his family is well-placed enough to be acceptable to Madame Morisot, and his salons, filled with painters and writers, offer exactly the kind of conversation Berthe is starved for. He changes Berthe’s painting (not right away; the academic habits of smooth acceptability are hard to break), but she starts by copying him, then shifts to trying to better him. And then he changes her life.

There is a lot of Manet, but Crane largely avoids the twin pitfalls of turning the book into a romance or a tale of mentorship or worse, artist and muse, keeping the focus on Morisot’s fierce desire to be her own person/woman/artist. The book’s main structure is simple chronology: Berthe’s life unfolds — sister Edma breaks their vow by marrying a naval man and leaving Paris; Berthe paints, becomes closer to Manet (as she sits for him and they begin an intense flirtation, she studies, in one of Crane’s perfect phrases, “the lovely menace of Édouard’s hands”); the Morisots live through the uprising of the Paris Communards, staying in Paris amid the violence.

This chronological approach serves Crane’s other agenda: the book is not just about painting or love, but about the excitement and difficulty of living in transitional times, in this case, the beginnings of modernity. She introduces Baudelaire early on, at the first Salon des Refusés, which occurred the same year that his “The Painter of Modern Life” came out. He coined the word modernity to describe the moment, and his early appearance, along with that of Zola, who talks of art needing to be of its time and place, signpost one of the book’s key concerns. The story of Morisot as painter and woman, model and lover, of her passage from sheltered girl to a woman who makes her own choices, is also the story of the birth of modernity. And modernity’s revolution is not just the Communards on the barricades, it is personal, as when one admits what everyone knows (married men have sex outside marriage) and even, perhaps, what many bourgeois women did not know, that they could feel desire, that they are carnal beings.
Things change, but women are not equal: Berthe and Manet cannot consummate their relationship. The risks — pregnancy, which she knows about, and his syphilis, which she does not — are too great. Freedom comes not in leaps and bounds, but in small advances, like Berthe being able to talk openly to her parents about the economics of her painting life. Manet, free to move in both bourgeois and bohemian circles, mocks Berthe’s “pretty cage,” but in Crane’s — or perhaps Morisot’s — hands, the story is not that of a woman needing a man to edge her out of safety. Morisot is eager to leave the cage. Early on, in fact, she decides to include a slash of scarlet in her paintings, liking the way it enlivens and sharpens the other colours, and seeing it as a “secret signature. My hidden dare and quiet revolution.”

Modernity, we come to see, is a thing of fits and starts. Even if it is not the main colour on the canvas, it still changes everything around it. Crane makes this connection in macro, through Morisot’s trajectory — and in micro, when she depicts the birth of Edma’s daughter. Exhausted as the baby is, the midwife insists that she must reach for the nipple herself, must decide to survive. Modernity is fumbled into life, its adherents advancing brave act by brave act. Present for both births, Morisot is fascinated and engaged by the one, awed and repulsed by the other. She wants to look away, but cannot, caught by the umbilical cord, a “bloodied and pulsing satin rope in dreamlike shades of blue, silver and white, living colours like glowing water.” It’s not a conventional object or event for a bourgeois woman to see, but if she looks away, she’ll miss something important, the work and joy of “scrambling for just what mix of shades could capture its life.”