From soprano to whistling warbler: A Review by Rebecca Geleyn of Nina Berkhout's "Why Birds Sing" 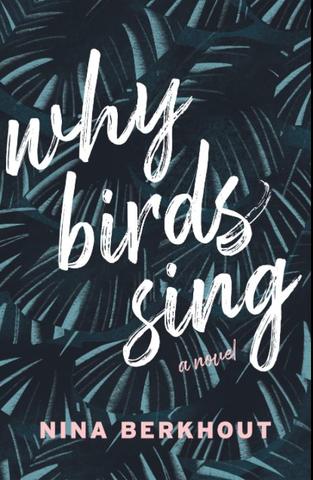 From soprano to whistling warbler

At the centre of Nina Berkhout’s most recent novel is Dawn: flawed, pragmatic, and in a lot of denial. The protagonist and first-person narrator of Why Birds Sing is the type to self-deprecatingly wallow in the misery of her past failures — with video footage, if possible. And her failures, at first glance, appear to be many. Dawn is a soprano on vocal rest after having flubbed a performance. Because the company she works for is contractually obligated to keep her on even while injured, she is assigned to teach a troupe of whistlers dubbed the Warblers; that the opera singer must now learn to whistle adds insult to her literal injury. While her professional life is falling apart, at home she is unable to get pregnant with her husband, Ashraf, and must deal with an ever-critical mother-in-law, Mina, who is always close at hand. The novel also opens with an immediate snag in Dawn’s life: Ashraf announces that his brother, Tariq, will be moving in with them against her wishes while Tariq goes through cancer treatments, but Mina cannot know about it. On top of that, he is bringing his pet parrot. All Dawn can think then, feeling irked, is that last time she saw Tariq “[h]e had looked healthy” (8).

Seeing Dawn in this pitiable state taps into a fascinating aspect of our human nature — the way we disintegrate (and perhaps rise above) our individual worlds falling apart. But more than that, it is entertaining to watch her self-destruct, and her woeful character makes this book a delightful page-turner. The novel is both fun and funny, and readers will be amused to see Dawn’s apathy play out against the external narrative world around her. Even the comments of kind strangers are somehow unwittingly jokes at her expense. For example, when she brings Tariq to his chemotherapy appointment, he says to the nurse, “I’m doing this for my bird. . . . She doesn’t like change.” Although Tariq is referring to his parrot, Tulip, the nurse then moves to put her hand on Dawn’s and says, “Isn’t he sweet, thinking of you” (47).

Because much of the humour is in dialogue and in the physical space the characters inhabit, I can imagine many of these comedic episodes taking place on stage (or on screen), like the operas Dawn used to perform in. When Tulip bites her hand, Tariq tells Dawn to “[l]ook at her from the side with one eye.. . . So she knows you’re not a threat. As if you were a bird, too” (12). In a later chapter readers can imagine the absurdity of Dawn “looking away and back at her sideways” (24), trying to gain the bird’s trust. Another scene describes Dawn and Tariq hiding from Mina, who is peering into the backyard:

“Done!” my mother-in-law called again.
We retreated further against the fence, into a space smaller than Juliet’s balcony.
There we held our bodies still, while Tulip chewed her dehydrated fruit.
It started to rain. I could feel his breath on my temple and tried to concentrate on
some branches while we waited for Mina to go. She didn’t open the gate to the
yard but she didn’t leave either, instead rearranging her trousers over her waist,
pulling them above her rolls of skin. Then she stared at a patch of crabgrass. (22)

The humour of this scene comes from the position of bodies and viewpoints: wife, brother-in-law, and parrot stand in uncomfortably close quarters while mother-in-law is out in the open being watched without knowing it. This type of stage-amenable humour continues throughout the book. Another telling episode is when Dawn tucks Tulip into her winter coat to buy donut holes from the shop down the road. She is refused service first for bringing an animal inside and second for trying to order via the drive-thru while on foot. It seems as though she just can’t win.

Plot and action do gain seriousness, as Berkhout foreshadows troubles in Dawn’s marriage and Tariq has trouble with the side effects of his medication. The novel is full of juicy (and high-stakes) plot twists. In tandem with these, Dawn gradually experiences growth, especially through her newfound relationships with the Warblers. First she must humble herself to the art of whistling, which she initially thinks is beneath her. But she begins to hear its beauty, first when one of the members, Ben, whistles a tune:

The melody was like a loon on water, slow and clear and pure. It floated on the air,
soaring and spinning, while the whistler retained complete control. His face didn’t
contort and his cheeks barely went in or out. He even whistled on the intake breaths.
His pitch rose without strain. . . . This was sound stripped bare to its simplest form.
This was something un-trainable. (43)

Dawn learns from the Warblers not to take herself too seriously, when one of them, Georgie, describes the group as neophytes: “That’s all we’ll ever be. We get together out of loneliness. And for the laughs” (145). Through the Warblers, as well as through her relationship to Tariq and Tulip, she finds renewed connection to the world.

Although the Warblers are important to the narrative arc, their scenes do feel somewhat instrumental. The group is first introduced all at once, and when the whole crew is together, the dialogue seems like chatter only meant to add humour or colour the backdrop of Dawn’s personal drama. Eventually, she delves into more serious one-on-one conversations with each of the Warblers, but even these are not quite fully developed. Still, the relationships among Dawn, Tariq, Tulip, and Mina are subtly written and moving. Certainly, readers looking for a fun and engrossing story will find Nina Berkhout delivers with plenty of finesse and sharp attention to detail — in the realms of opera, birdsong, and the little complications of everyday life.

— Rebecca Geleyn
is a PhD candidate in English/Creative Writing at the University of Calgary.