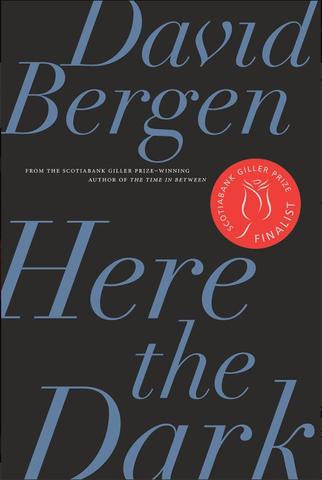 The unnamed first-person narrator, in the opening story of David Bergen’s Here the Dark, is disoriented. His girlfriend writes him letters from Europe; these arrive long after they speak on the phone, so she broke up with him on paper but is still chatting about the wedding. The eighteen-year-old decides to use his outdoor skills and Christianity to edify the “aimless” children in a small community up north where he goes to work for the summer. There he meets April, who was told by her grandma to “stay away from white boys.” He has a hard time figuring her out: “I walked through town and found her house exactly where she said it would be. This surprised me and I wondered why it surprised me. Who did I think April was?” With his knowledge at stake, he is taken out and left in the bush by April’s uncle, who warns him, alternately, to “trust yourself” and not “run around in fucking circles.” After two nights lost in the bush, the narrator returns home and marries his girlfriend as intended. She helps him take his writing “beyond sentimentality into clarity.”

This structure of disorientation, reversal, and settling is familiar to short story readers, but rarely as intricately and evocatively expressed as it is in the seven short stories and one novella that form the small yet weighty collection shortlisted for 2020’s Scotiabank Giller Prize, an award Bergen won in 2005. Lulled by confident and poetic prose, the reader could be fooled into missing the nuance of Bergen’s writing: it lives in the detail, the gesture, the words spoken and how they’re received.

We know the central characters of the short stories by the cowboy hat he lays on his knee, or the downward gaze suggested by his observations of others’ shoes. The stories tend toward a neutral protagonist, one whose actions are generally in reaction to secondary characters’ invisible labour. Often women, these secondary figures require the protagonist to confront his beliefs, to reexamine his knowledge, to extend generosity, or hope — sometimes to them, but mostly to himself. Without April, Jennifer, Janice, Marcie, or Girlie, the stoic, generally well-meaning men would continue on just doing their best. Some secondary characters explain themselves: Janice — who is in late stages of MS, and falls for the celibate farmer Bev in “Never Too Late” — “talks about herself as if she were describing someone else.” Others are given little context: the Black boy who watches TV in the young narrator’s living room is dubbed “Wanda” after the town he’s from, and is given one word in the story in which he appears: the eponymous “hungry.” While the minor characters are spared judgment, this may be because they’re not truly seen by the protagonist beyond the role they play in his transformation. The central figures are straight-talking men, not the writer carefully observing human behaviour; reluctant to examine their own nature, can we expect them to see others?

Bergen writes in a tradition of declarative sentences, where the conjunction “and” slings together concrete details with blunt action and a well-earned epiphany tacked on. It is a refined stream-of-consciousness, turned cinematically outward, often to nature — human or otherwise. The turns are so carefully done we don’t realize we are on the precipice of action until the ground falls out from under us, opening the stories up, like the crumbling earth, to a new equilibrium. In “Saved,” a young Vietnamese boy, who we at first understand to be framed for the murder of an American missionary, replays the experience as he lived it: “he called out and she began to run and so, in order to stop her, he hit her.” Immersed in place and action, and unburdened by the strain of moralizing, the reader is invited to peel back judgment and instead examine the irreducible nature of human reaction.

While Bergen writes with a light hand, the complex situations into which he corners his well-meaning characters are not easily resolved. This can mean the juicy stuff of lasting literature, such as in “Man Lost,” when an act of revenge is drawn out and its intentions muddied. It can also mean a compelling conclusion is still left wanting: the spoiler alert for “Leo Fell” is in the name of the story. By refusing to condemn or celebrate his characters, Bergen sometimes raises questions he cannot answer. The novella “Here the Dark” is three times the length of the longest story in the collection, and the only one whose protagonist is a woman. As in the other stories, Lily’s situation is layered and her experience of it conflicted, yet Bergen explains each doubt, explores every emotion. In their condensed nature, the shorter stories evoke larger worlds; in the ninety-page novella, the power of the cloistered Mennonite community and Lily’s trapped consciousness are diffused through elaboration. Bergen didn’t miss the mark he set in his other stories, but he hit it more times than needed in this long piece.

In “How Can n Men Share a Bottle of Vodka?,” a high-school math teacher with a Thermos full of alcohol says of the woman he will marry: “blessed thing that she didn’t know what n stood for.” A short story, David Bergen proves, has a fixed set of constants, and while this allows the reader to conceivably solve its equation — to get closer to that unknowable variable — can the story really be the one asking the question, if it is also determining the answer? The conclusion of “Man Lost” reads: “there were questions that they did not ask, and they could not know that these questions even existed.” It is for all the questions, lingering and gathering force, that I will be continuing to pick up this outstanding collection.

— Véronique Darwin
lives in Toronto where she is working on a novel and a screenplay.