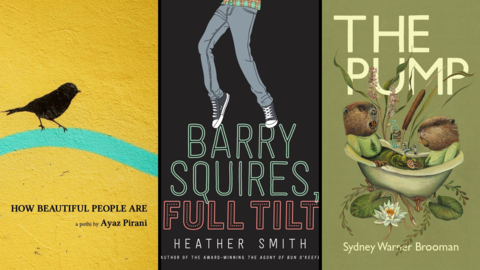 Sydney Hegele’s (aka Sydney Warner Brooman) short fiction collection The Pump just won the ReLit Award. I read The Pump months ago, but I keep returning to that hair-raising town haunted by colonial industry and its various insidious poisons. The Pump is like a gothic small town on acid. This affirmed me, scared the crap out of me, and made me wondered how the author did it. The Pump is an assured and daring debut book about class, gender, desire, and the natural world in revolt against our abuse of it: astonishing for a first collection.

Newfoundlander-turned-Waterloo-dweller Heather Smith’s Barry Squires, Full Tilt is a book that I’d like everyone to read. It is a manual for living masquerading as a YA book, but do not be fooled! This book tore the beating heart out of my chest and then made me laugh so hard a page later: the stepdancing sequences are indescribably hilarious! Barry Squires is half-cracked but all in.

I could read Ayaz Pirani’s new book, How Beautiful People Are: a pothi, pretty much forever. This book of poems uses repetition and cyclical structures beautifully to return again and again to the question of how to attend to beauty and kindness in a harsh world. A pothi, a term I had to look up as it was new to me, is a Hindi word from Sanskrit that means book, but it can also means a clove of garlic, among other things, and that made me think of this book as something to be endlessly opened and peeled apart in the best way. Like the best poetry, it sings.

Tanis MacDonald is the author of six books, including the forthcoming Straggle: Adventures in Walking While Female (Wolsak & Wynn). She has been awarded the Open Seasons Awards for Nonfiction and the Bliss Carman Prize for Poetry, and has had work appear recently in Atlantis, FreeFall, and Grain. Her essay "Ricochet: An Arcade" was featured in the all-creative nonfiction issue of The Fiddlehead.