What is your Emergency? : A Review by Susan Haley of Shandi Mitchell's "The Waiting Hours" 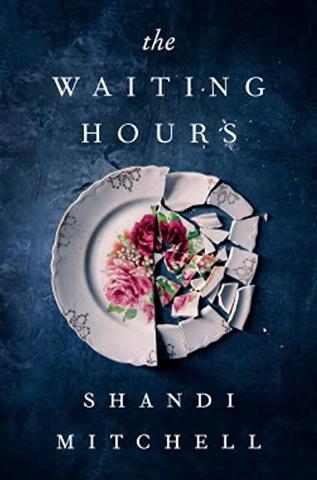 What is your Emergency?

This very accomplished novel is by a Maritime writer I had never run into before, although she has written another, Under This Unbroken Sky, which I intend to read now.

The Waiting Hours is about emergency workers, and the “waiting hours” of the title, is the period during the depths of the night when, if anything happens, it is usually terrible.

There is the Emergency nurse, Kate, who also works with her dog on an elite search and rescue team. The first few pages of the book contain the electrifying story of Kate and the dog, Zeus’s, practice “live” search. In the real searches they had performed: “together they’d had four live finds and three cadavers.”

Kate injures herself in the practice, a bad cut on her hand, and the injury follows along, bothering her, throughout the story. (“The cut on her palm throbbed and the edge of the bandage had lifted.”)

It is a book about people who injure themselves, physically and mentally, in the course of doing their normal work.

We meet Tamara, a 911 dispatcher, who is deep in some sort of depression — easy to say PTSD, but that could be said of all these characters. She consciously calms herself, riding home from work in the only vehicle she can bear to take, a taxi driven by a trusted driver. Crossing the bridge (this is Halifax) she is thinking about the “things” that fall. Then directs her thoughts to the 5 things she can see, the 4 things she can touch, the 3 things she can hear. . . .

And there is Mike, the police officer, who is perhaps teetering on the brink of PTSD when we first meet him, making a difficult and frightening arrest (“Mike twisted the cuffs, placed his hand firmly on the perp’s neck and shoved.”) but he also acquires physical injuries as the story progresses, which are painful even to read about. This is a good cop. He has insight and compassion. But his feet hurt in the tight boots and his belt is weighed down by the holster, the taser, and he has injured his back. His wife and children don’t really understand the space he is in these days; they merely resent the neglect he presents them with day after day. He has begun to take excessive doses of codeine, and he knows where to get opiates on the street, too.

Something happens: a drive-by shooting. Tamara is the 911 operator, who talks with the boy Antoine, who called it in, as his friend Devon bleeds out. Mike is the cop who arrives at the scene first, and Kate is the emergency nurse when Devon is pronounced dead.

Rhonda said, “Switch,” and Amy took her place. Catching her breath, Kate glanced to the vitals monitor before compressions resumed. The heart rate was flat. The line jumped jagged. One-two-three-four . . . Amy was counting under her breath. The elapsed time in          the room was fourteen minutes . . .
More compressions, more shocks, more drugs. The bags were emptied again and more blood was rushed in . . .
“Clear,” Savoy called and hands lifted. She pressed the paddles to the still chest and fired. It was the tenth one.
“Stop.”

I want to point out the skill in the writing of this passage, which for reasons of space, I can’t quote in full. It is suspenseful and immediate and takes you right into the minds of the people who are desperately trying to save this life.

I was on a book jury when this novel was being considered for a top prize, and one of the other jurors objected that the book concerns themes and subject matter which are already fully handled and depicted for us in TV series cop shows. The book does treat the same material, but what fiction can do for us, no TV show or play or movie ever can. However immediate action can seem when performed by human actors, we are not privileged to see into their minds and hearts.

And this book is not a thriller like a cop show, where the PTSD or depression, or the madness of the first responders is cynically alluded to as “part of the job,” something that in an odd way, makes the action seem more sophisticated. In the case of this book, that trauma is the real subject matter. What happens to these people as they are affected by the action, how it shapes them — hurts them, sometimes terribly, irreparably — is what the book is about.

The accident or crime which culminates in this scene of desperate but unsuccessful emergency resuscitation, is at the heart of the story. It brings together the varied experiences of the three emergency workers, who all know one another tangentially.

Tamara comes to realize that Devon is her grocery delivery boy, and recalls a scene, which is beautifully and tenderly realized:

“Can I play you somethin’? I just learned it”
He was moving towards her piano. Before she could find words, he had sat on the edge of the bench and pulled it closer. The wooden legs scraped the hardwood. His untied laces swept the floor and his sneakered feet reached for the pedals . . . The juvenile plink            of “Twinkle, Twinkle, Little Star” jarred her ears. His finger jabbed the notes.
. . . The word STOP was stuck in her throat . . . when the boy’s posture changed. He shuffled his bum closer to the seat’s edge and launched into a second refrain. But this time, with his body cupped into the piano, the music exploded with a percussive rhythm as              his hands jumped across the keys. His left foot thumped out a beat and his right depressed the sustaining pedal and the piano’s voice opened louder. . .

Attending his funeral leads her back into the deep history of her own life, perhaps to some relaxation or resolution of her position as a Black woman in a white middle class profession. (“Her colleagues seemed to forget that she didn’t look like everyone else in the room, and there was an unspoken expectation that she should forget too.”)

But there are two other main characters whose stories are told in the same depth. The nurse Kate is involved in a hopeless affair with her team leader, a married man. Her self-hatred increases with her heavy drinking. And at the same time, she has a terrible backstory, the psychosis of her brother, which damaged her childhood and led to the early death of her mother. She is now in the dilemma of trying to recognize her brother’s insanity for what it is and doing something to save him. Finally making the 911 call is the hardest thing she has ever had to do: “My brother . . . my brother attacked me.”

Besides these three characters, the dispatcher, the nurse and the policeman, there is also a fourth, Hassan, the taxi driver, who is bending his mind and will to saving Tamara, out of horrific experiences of his own, from his early life as an Iraqi dissident. His presence in the story serves to remind us that the tragedies in our relatively safe world, of nurses and cops and emergency services mark people for life, but there is a larger world, where people are brutalized and murdered, and where there is no recourse, no 911 to call.

— Susan Haley
is a novelist currently writing an autobiographical meditation.