My obsession with persona, especially in the lyric, and with writing the self brought me to Eileen Myles' I Must Be Living Twice. The poems are resplendent with sex, humour, and reflection — a kind of inquiry that is dramatized further by the fact it's a selected works, and she employs herself as a kind of third person. On writing poetry, she writes about the discovery of "something deeply anonymous about the self."

Eric Hobsbawm's The Age of Revolution is a classic study of the French and Industrial revolutions, and their subsequent impact. I've also been rereading Nietzsche's earlier works and Walter Kaufmann's study on his thought. I'm going through the Greek Tragedies, especially Euripides, as well as David Ferry's translation of Horace's Odes. I'm also finishing Stephen Spender's memoir, World Within World, which I picked up for a dollar and which gives us a vivid sense of the preoccupations and experiences of those British poets who came of age in the 1930s.

I've had a great run of poetry reading this summer; having just begun a long-anticipated sabbatical, I'm finally getting to books that have been on my list for a long time: Claudia Rankine's Citizen, Renee Sarojini Saklikar's Children of Air India, Soraya Peerbaye's Tell. These books have heightened my growing feeling that the best contemporary poetry engages with larger issues, generally difficult ones. (That is, larger than the issue of how to write a good poem.

Wislawa Szymborksa’s poems in translation — both ones I first read about 20 years ago and ones recently new to me — have been satisfying me at deep levels with their mixes of the everyday and the surreally fanciful, the grieving and the humorous, the raw and the powerfully shaped. Last month I read a few of the poems to my brother-in-law in a hospital during his final week of life.

Fiddlehead poetry editor Ian LeTourneau and local Fredericton poet Lynn Davies were on CBC Fredericton's Information Morning last Friday, July 8 to give their summer reading recommendations. You can listen to the podcast here.

What do you plan on reading this summer? Read something recently you'd like to recommend? Let us know in the comments!

Books Received — What are you Looking Forward to Read?

Here is a picture of the recent books received at the office. What are you most looking forward to reading? Tell us!

Books Received — What are You Excited to Read? 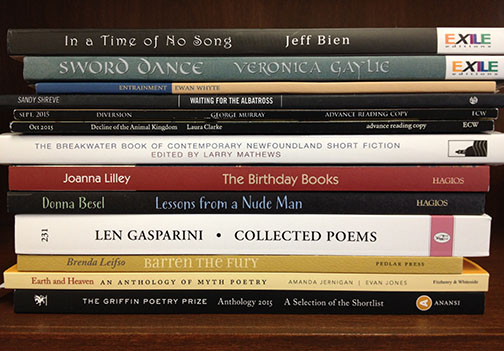